Hi gang!  Scott and I almost didn’t go out last night because he had a work thing going on that needed attention.  I was a little bummed but tired so I was okay with that.  Well he got it “working” (if you are a software developer or into computers you understand the quotes) so we were able to head out.  First stop was to pick up my race packet!  Disappointment begins here.

We had to drive up to Westerville (20-30 min drive) to pick up my packet.  The store was also hosting discounts and yesterday was the last day to get the most discount on purchases, 20%.  Which is why I wanted to go that day.  Since we were going to be up there anyway, Scott said we should have dinner which lead to date night.

So we arrive and I look on the printout to find my number.  I get it and inside the store is a bit chaotic.  I guess everyone had the same idea I did, go in Friday night.  Bummer because running stores aren’t big anyway so when there’s a bunch of people in there, I can’t think straight.  Too much going on for my wee brain.  I start looking for my packet and someone comes over to help.  She seemed very flustered and very generic.  Just going through the motions.  She hands me my bib and then tells me that they don’t have any medium shirts because they didn’t arrive with the shipment.    Part of our race packet was to include a technical tee-shirt.  A small is too small and I didn’t want a men’s (which were white and the women’s this really ugly gross grey. What’s up with that?!) so I have to wait until it arrives and then I can come back and pick it up.  Lovely.

We get back out to the car so I can look at my bib. 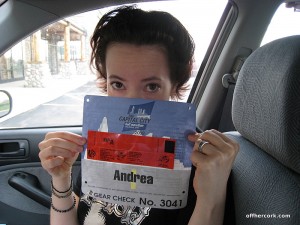 Here it is!  I thought the bib was going to have our full name on them and I was excited about that until I saw only my first name.  Booo  It’s a name so I guess I should be happy about that, right?

We drove around for a little bit because the area has changed since we last were there (we used to live in Westerville).  Some new restaurants popped up and some old ones replaced.  We decided to eat at BJ’s Brewhouse.  Mostly because I wanted a beer sampler as I’ve never had one before.  We weren’t pleased that it was a chain restaurant as we do try to avoid those as much as we can.  We were told it was a 30 minute wait but could be less since it was just the two of us.  We sat down to wait. 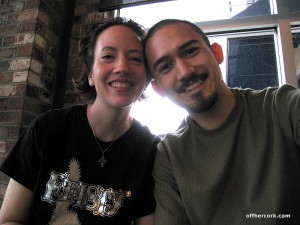 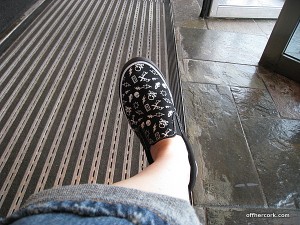 My shoes because I love them and don’t get to wear them all that much.

The doors to the entrance are those big kind of circle turning doors.  Normally I associate them with malls or banks.  As I was sitting there waiting to be seated I couldn’t help but feel like it was sort of symbolic of the restaurant and how they feel about their customers.  The door is basically used and meant to get people in and out quickly.  No stopping or lingering around.  Get people in, get them stuffed, get them out.  It seemed almost like a bizarre kind of human cattle shoot of sorts.  It didn’t endear me to the place and made it seem even more commercial and less welcoming.

The decor was sort of funky hip warehouse.  Exposed air ducts and frame work, garage doors open (again to let in the livestock?) and it wasn’t very big.  From the outside you would think it was huge but it really isn’t.  To their credit the booths and tables are spread far apart from each other.  You don’t feel like you are on top of each other while you eat nor do you have to pretend to not hear your neighbor’s conversation. 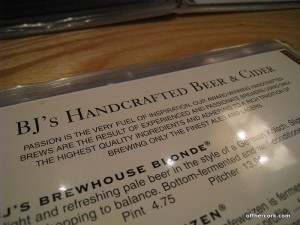 Our server was nice enough but I did feel kind of pushed to order our drinks quickly.  I wanted to look over the beers and talk with Scott about what kind of sampler to get.  The server was sort of like, “Well if you like dark try these.  Get the four set sampler and so on.”  And then instead of giving us a second to think it over he just stood there looking at us while we made a decision.

Let me breath for a second!

We went with a four sampler of their darker beers. 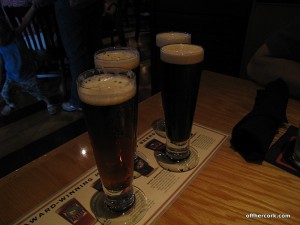 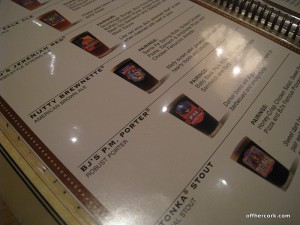 The red was good but with a bit of a lackluster finish.  Nothing to remind you that you just drank a beer.  The brown ale was weird and neither of us liked it.  The porter was very good and great with food.  The stout was so creamy and awesome but didn’t pair well with food and would be a much better sipping beer.

And then we spent a crazy amount of time looking over the menu because neither of us could decide what to have.  Apparently BJ’s is known for their pizza and while it looked good, I didn’t really want chain restaurant pizza.  If I was going to do that, I might as well call up Pizza Hut, same thing.

We did figure out an appetizer. 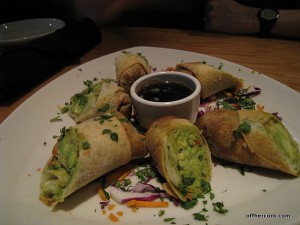 Avocado rolls.  It was supposed to be avocado, chipotle peppers, onions and some other stuff eggroll style.

It was really just some avocado and onion in an eggroll.  It was good!  Just not as spicy or flavorful as we were expecting.  I had one of the smaller halves.  We also placed our orders and mine came with a house salad.  I got it with balsamic dressing and I should have asked for that on the side. 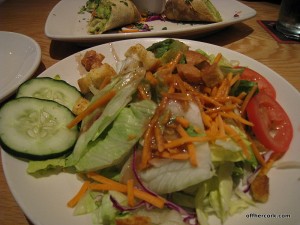 My salad was drenched!  Allow me to get up on my soapbox for a second.  This salad was so basic it’s silly.  Iceberg lettuce, a few shredded carrots, two slices of not ripe tomato, and two slices of cucumber.  Really?  Iceberg lettuce even?  I know they have baby field greens because it comes as part of some dishes.  And I know they have romaine and other lettuces because they have a whole entree salad section.  So why the iceberg lettuce with the house salad?  What’s that all about?  Give out some better salads! I absolutely hate when restaurants do this!  Talk about taking the cheapest road possible and not taking care of customers.  /soapbox  I didn’t eat all of the salad because it was over dressed and I was saving room for my dinner.

My entree comes out and it’s huge!! 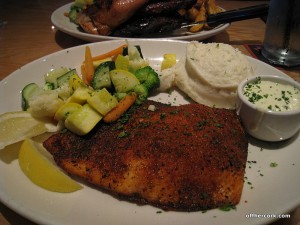 I got the blackened salmon with veggies and instead of rice pilaf, I asked for some of the cheddar mashed potatoes. 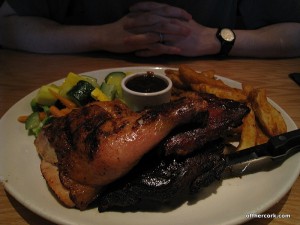 Scott got the roasted chicken with 1/2 a rack of ribs, veggies, and some fries.

I was surprised by how large that piece of salmon was.  Goodness!  That impressed me.  It was a bit over cooked but still very edible and yummy.  I had a few bites of the mashed and they were also good.  I realize it’s loaded down with butter, cheese, and cream so I stuck with small bites.  I wanted to try it and if I’m going for empty carbs (rice pilaf is also empty carbs) then I’m having something yummy!  The veggies were basic but good and I bet cooked in butter.  The salmon I’m also wondering if it was cooked in butter.  I don’t know if places have olive oil so I never think to ask about no butter. It’s got to be cooked in something so there is going to be some fat but I don’t want to say, “no butter please” only to have it cooked in veggie oil.  Ew.  I’m not sure what approach to take in situations like that.

I ate maybe 1/2 the salmon, maybe 1/3, it’s hard to tell but I brought a lot home.  Most of my meal actually.  I had a bite of Scott’s chicken and that was okay.  I had two bites of ribs and they were good, a bit dry (but again, chain restaurant, you can’t expect great ribs) but good.  And then a insane amount of his fries.  They were battered and fried which made them glorious.  And horrible. :p  But I ate them because I don’t even remember the last time I had actual fries.  Although I guess I don’t consider those actual fries since they had the batter.  But still, yummy and lovely.

We boxed up the leftovers and I peeked at the bill.  Oh man what is this?!  We got charged an extra 30cents for the stout sample!  Yes I realize it’s only 30cents but the whole point behind a beer sampler is to try the beers at a fixed cost.  Because it’s a sample.  AND if this is the case why didn’t the server speak up and say, “Okay, but I need to point out to you that by including the stout in your sampler, there is an extra 30cent charge.  Do you still want it?”  Then we would have known ahead of time and had the option to choose what we wanted to do.  Now we have to pay for it which is irritating to me.

As always I had a great time out with Scott because he’s a good date.

And while my food was one of the better meals I’ve had at a chain restaurant, I’m not sure if I would go back. 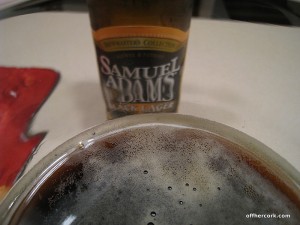 We came home and took Rocks out for a quick walk and then settled in for some TV.  Scott poured a black lager and I had a few sips but not much as I had my beer fill.

I wasn’t full or overfull or anything but I still felt blah after my meal.  I don’t know if it was sitting heavy in my tummy due to all the butter or maybe the fries or what, but I felt blah.  I’m glad I had all those veggies and fruit at lunch though!  That defintely made me feel more balanced.

Columbus has some local breweries so it’s time to look for one to try out and test another sampler!