Warning: Parameter 2 to WPE\Site_Preview::the_posts() expected to be a reference, value given in /home/customer/www/foodembrace.com/public_html/wp-includes/class-wp-hook.php on line 303
 Saturday, April 25th, 2009 | Food Embrace

Hi guys!  This is going to be real brief but no worries, nothing exciting happened yesterday anyway. 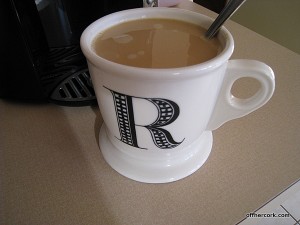 I got up way too early and stumbled downstairs to have some coffee.  I let Rocky out and then left the sliding glass door open because it was HOT outside.  Goodness!  This weekend we’ve bypassed Spring and just went straight to August apparently.

I did some officey/worky/bloggity things and once Scott got up I made breakfast.  It was hot so I was really feeling the oatbran and instead decided on some yogurt mess. 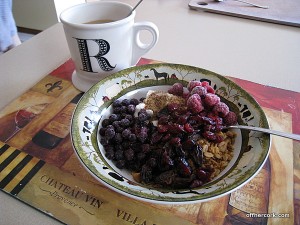 I had a little bit more coffee and then had:

YUM!  That did the trick and I was ready to hit some MT class. I almost wore a tanktop to class but didn’t feel like doing a quick shave so I wore a shirt.  That was a mistake, it was hot in there!  My shirt felt like I was wearing a big huge mumu.  Ew.  After class we quick ran some errands and then cleaned up.  Lunch was easy! 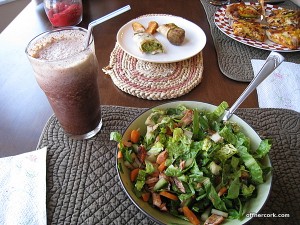 A salad with some leftover salmon from Friday night.  Not all of it and there’s still a ton left, that piece of salmon was huge!  With:

With a bit of balsamic.  The salmon has butter and a ton of seasonings on it, I didn’t need any more fat so I omitted the oil.  The salad was perfect and I didn’t even eat all of it.  Along with salads was a smoothie!

Glorious!  My blender isn’t making my smoothies so smooth anymore but so far it is still getting the job done.  In the middle are leftover avocado rolls.  I had one and picked a bit of stuffing out of the other.  After lunch we took Rocks outside for a bit then we settled down and played a little Left 4 Dead.  What a frustrating game!  After a few hours of that, we had some snacks and watched the Pens game.

I wasn’t too hungry since lunch was filling and late in the day.  Scott had a heavier lunch so he was cool with game snacks too. 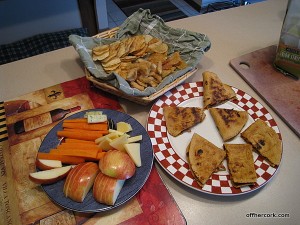 I also took Scott’s leftover ribs and chicken from Friday and made BBQ quesadillas with them.  YUM!  I had two triangles.  I ate most of the apple and carrots.  I picked at the chips and picked at the onion ring things.  I had to make myself stop eating those because they were so good and addictiing.  I didn’t need the “fried” stuff so I watched my portions.

The game was totally nail-biting anxiety-inducing but such a great game.  The Pens game back from a 3-0 deficit to spank the Flyers 5-3, thus ending the Flyers season and the Pens move on to the next round of playoffs.  HOORAY!