Warning: Parameter 2 to WPE\Site_Preview::the_posts() expected to be a reference, value given in /home/customer/www/foodembrace.com/public_html/wp-includes/class-wp-hook.php on line 303
 March 29th, 2009: Dinner | Food Embrace

Hi guys!  I didn’t get to spend nearly enough time with Scott yesterday.

He was doing taxes most of the day and I was off on my own puttering around.  Late afternoon we took Rocky out for a walk and holy cow it was cold and very windy.  It was a damp cold, the kind that sinks right into you.  After the walk we drove the route I ran and it ended up being 8.6 miles.  So I did run farther but not that much.  I had my slowest pace time ever yesterday at over a 12 minute mile.  Goodness that’s slow.  At least you know I wasn’t lying when I said I took it easy.

Just as we got in the car to drive the route, it started raining and rained most of the night.  We finished Rocky’s walk just in time!  When we got home I chatted with my mom for a minute and then it was time to get started on dinner.  I was very lazy last night and being selfish.  It was going on 8pm by the time I was starting dinner and I didn’t want to spend 45minutes or so making it.  I wanted to be sitting on the couch with my boys! 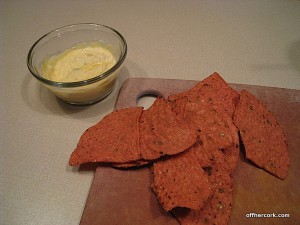 While dinner options were being discussed Scott asked for some con queso to snack on. :p

I had two chips with dip, so good!  Then I decided that I was going to heat up leftover pizza and make pita pizzas as well for dinner.  Easy! 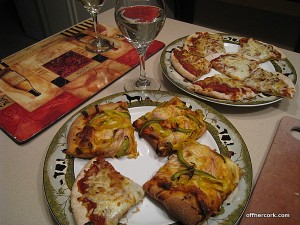 Don’t let my plate fool you, that’s not what I ended up eating.

There were three pieces of leftover pizza and I made two cheese pita pizzas.  I ended up eating only one slice of the leftover pizza and had three triangles of pita pizza.  I gave the other two leftover slices to Scott.  They were a little heavy for me and the pita was lighter and much better.  To drink I had a splash of white wine mixed with seltzer.

After dinner it was time to sit on the couch with a movie.  We watched The Italian Job (new) and I sipped on a small glass of wine.  I almost mixed it with seltzer again to keep it light and keep my throat hydrated but changed my mind.  “It’s only a very small amount, not even a glass.  I can handle that straight.” 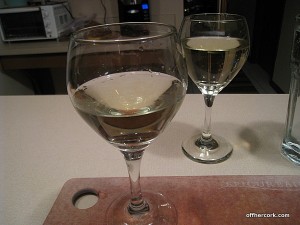 Not so much.  Totally dryed my throat out.  I tried to combat it with more seltzer and loads of water but it didn’t work and I went to bed with a sore throat.  Booo