Warning: Parameter 2 to WPE\Site_Preview::the_posts() expected to be a reference, value given in /home/customer/www/foodembrace.com/public_html/wp-includes/class-wp-hook.php on line 303
 March 25th, 2009: Dinner (And KODO Recap) | Food Embrace

Hi guys!  Last night ended up being a late one.

By the time we were sitting on the couch in our jammies it was 11pm.  That’s a late night for us old farts.  But first, eats!

Not that I was hungry but I just wanted some, I had a bit of yogurt with some granola. 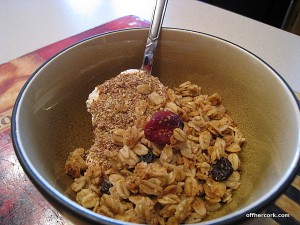 Love yogurt + granola.  Mmmm It helps my soul, I swear it!  Then I blew off work and stuff to read in bed for a bit.  I turned on the heating blanket and just chilled for about an hour or so.  Thanks to Andrea for the Overstock suggestion!  I totally forgot about them and I saw some desks that interest me, so yay!

Dinner was simple.  I pulled out some veggie shepherd’s pie for Scott and heated that up.  I wasn’t feeling it though; seemed a little too heavy.  Plus we were going to a show and high class civilized people eat things like truffles and goat cheese before their show.  I don’t have truffles and I don’t think I would eat some if I did (of course referring to the fungus and not the chocolate) but I do have goat cheese!  So I went that route. 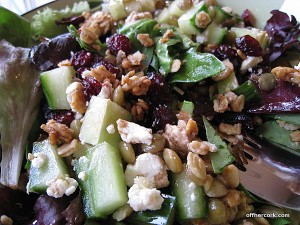 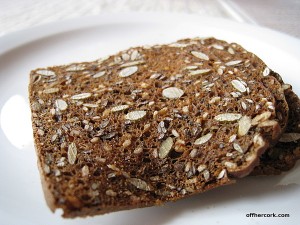 I had a small salad with:

Drizzled with some balsamic and oil.  On the side I had a three Raincoast Crisps crackers, so yummy! I love those things!  After dinner it was time to get dressed for the show!  High class civilized people always have a preshow drink.  Since I’m battling the hacking cough, I went with a spritzer instead.  High class civilized people don’t say fizzies, they say “spritzers”.  So I had a POM spritzer. 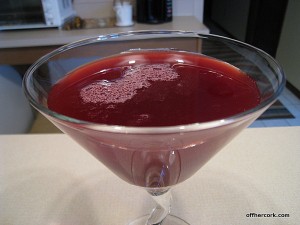 POM + seltzer.  I’m sure high class civilized people would have used tonic but I don’t have any and I like seltzer thankyou.

While Scott was primping, I was trying to find something to wear.  All my pants and skirts are too big on me again so I feel silly.  It was pouring rain, so a skirt was out.  And I remembered it was a bit tightly packed in the theater so I wanted to wear something comfortable.  I chose pants that didn’t look too awful.  I had chocolate brown cords on and that green shirt.  It was okay but nothing fancy-schmancy.  Then I had on brown shoes which I love but are more for going shopping then they are for going on a date to a show.  Scott came downstairs looking all dapper and fancy with dockers and a button up shirt, suede jacket and dress shoes.

I looked like his cousin Cletus dressed for Margarita night over at The Applebee’s.  Especially since my hair was crazy flat because of the rain and humidity.  And my clod-hopper shoes made the outfit.  I need to drop some serious cash and go shopping.  I need nice clothes and shoes.  Good lord.

Then we were off!  We wanted to leave a bit early but somebody took a long time primping and dealing with facial hair.  And no it was not me!  If I had that much facial hair to deal with I would probably cry.  So we left around 7:00pm and the route my date uses to get to the Palace Theater downtown takes us through the ghetto which doesn’t make for much date night fun.  It does however provide discussion starters because you notice things while stopped at a red light.

“Hey, that bus bench ad is for a lawyer you can call when you get arrested.  Do you think people write down the number to keep handy?”

That said, I would like to try a different route that does not take me and my wee hobbit car through the ghetto.  Thanks, Date! 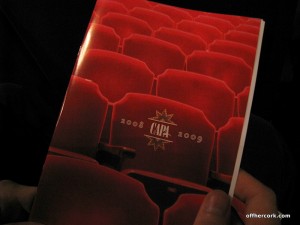 Basic program which was more ads than info

We parked and arrived a few minutes before 8pm.  I was surprised how many people were there only because I didn’t think many people knew about KODO.  We were not allowed to take pictures but I took some anyway because I’m a rebel and I strive to only bring you the best recaps!  I didn’t take any of the performance though because that is very very wrong and I was watching the show.

The Palace Theater is very old and just plain awesome.  It’s beautiful inside! 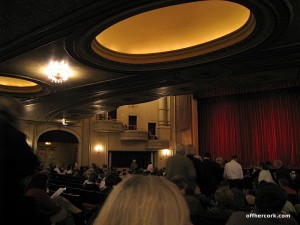 View to the left 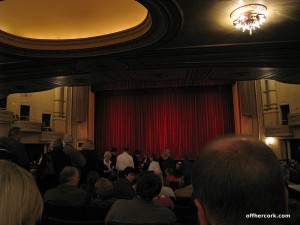 The seats are a little squishy though and people are way too far into my personal space.  It’s a challenge to have to accept that for the evening but I managed. 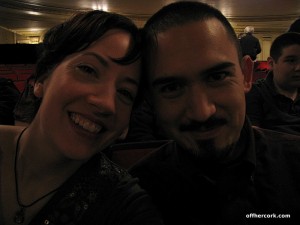 Here’s us being very uncivilized and waiting for the show to start.  It’s okay though because once the show started I realized that we were not in civilized company.  Oh Columbus. Twice I’ve been to the Palace to watch a show and twice I’ve been very disappointed by the audience.  Where are your manners?!

People’s cell phones going off with crazy ringtones despite the announcement before the show to turn them off.  Screaming kids.  I understand wanting to expose your child to different cultural things but a 2 year old at a taiko drum show that runs 2 hours probably won’t hold the kid’s interest.  Just a hunch.  Oh and the wolf whistles or whatever that very loud fingers-in-the-mouth (Dude, seriously how disgusting!) whistle is.  Really?

But aside from that the show was awesome!  These folks have amazing skill along with strength and conditioning to be able to play those drums.  The show was just short of two hours long and it was nonstop.  I have no idea how they were able to do it without breaks.  Sure some of them got breathers here and there, but someone was always doing something, it was never quiet.  I would go see them again in a heartbeat!

Once it was over we were able to make it to the car and out of the parking garage in record time.  We got home around 10:30ish and changed into jammies.

Civilized people after a show go out for drinks and dessert.  We are old and slightly less civilized so it was home to have a bedtime snack in our jammies.  But oh, what a glorious bedtime snack it was. 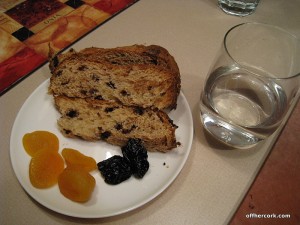 just what was needed

Dark chocolate chip panettone.  Oh yeah!  I’ve had this baby in my freezer waiting for the proper moment to indulge.  Last night was it and I had two wonderful slices.  It was so good!  Three are on the plate because one is Scott’s.  Plus some dried fruit for me some prunes and apricots.  And some seltzer on the side.  My throat was screaming for a drink.  It was dry and scratchy because I didn’t have any access to a drink during the show.  I did very well keeping myself from spiraling into a coughing fit.

After my snack it was bedtime and I was wiped out!  I wanted to get a picture of us in our jammies with our snack so you could see for yourself how proper (or unproper?) we are but I was too tired.  Sorry, I know you’re disappointed at not seeing my plaid jammie pants.  They are a sight to behold I promise you.