Good morning guys!  Last night SF class ran a little longer than usual but that’s okay because we were doing some cool stuff.  I was frozen solid though.  It was 9F out last night which meant class was cold (because the building is older and not so warm).  My toes were frozen.  The kind of cold that sort of hurts?  I already had tea or I would have made some when we got back. 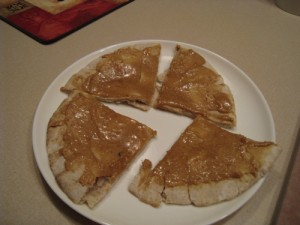 I was a little snacky so I made a WW pita topped with some PB and honey.  I actually only ate two of those slices as they filled me up enough.  We finished the Pens game from Saturday and they lost but damn it was a good game.  Wish they would play like that ALL the time instead of being punks.  By 10:30pm I had enough and went to bed where I promptly passed out.

I slept in today since I wasn’t running this morning.  I got to sleep in till 7:30!  And I didn’t sleep crappy, hooray!  It was 0degrees out this morning when I took Rocks out for his potty run.  Dang.  And then I came in and made some breakfast. 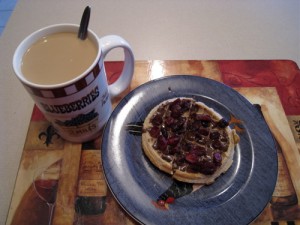 Kashi waffle with a bit of dark chocolate PB and some cranberries on top.  With morning coffee and creamer that was awesome!  Why is coffee hit or miss some days?  I have no clue.  I didn’t eat all of that waffle; I left maybe a quarter of it behind.  I love that my body and mind have gained enough experience to take me to the point of instinctively knowing when to stop eating based on activity level.  Since I’m not running, I don’t need as much fuel to get me through the day.

The reason I’m not running this morning is because I’m going to get my hairs cut today!

And I shower after I get my hair cut to help get rid of all the loose hairs.  I didn’t want to run and then shower, get my hair washed again at the salon, and then come back home to shower a second time.  I haven’t had my hair cut since before Thanksgiving! My stylist is that popular.  She’s awesome though so I’m not surprised.  My hair held up well, due to the great cut but it is at the point where it really needs a trim.  I have very very fine hair and dead split ends weigh fine hair down like you cannot believe.  I will have to make my next appointment when I’m there so I’m sure to get in at a decent time and not months down the road.  Or at least I hope!

After my hair cut it’s over to WF for some yummy goodness.  I hope they have some nice things to pick at, I’ve been pretty disappointed in their hot and cold bars lately.