I almost wore a skirt last night but then changed and dressed up a pair of dark jeans instead.  I was cold, it was chilly outside, and I didn’t want to risk being cold in the restaurant, so jeans it was!  With a smoking top introducing the girls and a pair of black boots.  Do any of you like this stuff or should I just bust right to the food?

By the time Scott and I headed over to the restaurant, I was starving.  Close to hangry and the shakes but not quite there yet.

The hostess told us it would be about a 30minute wait and gave us this crazy pager.  It looked sort of like an old school taser and when it went off it talked to you!  Not just buzzing, but an additional, “Your table is now ready.  Your table is now ready.”  For the record, I hate when electronics talk to me, it creeps me right the hell out. 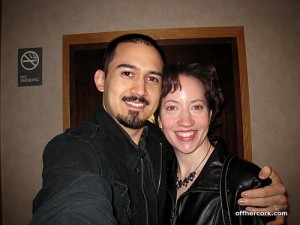 We passed the time taking some pics of us and then our table was ready!  We honestly couldn’t have been waiting more than 10 minutes if that.  First order of business was a Japanese beer to split. 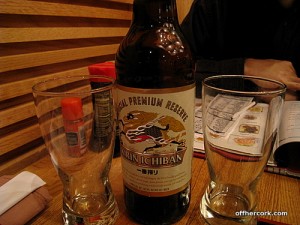 And they brought out a 40 bottle.  Oh yeah, we were are rocking in style now! It also wasn’t an even split, Scott had more than I did. 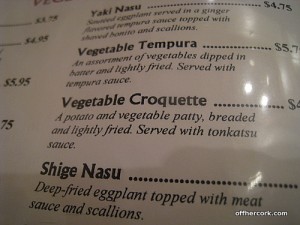 We also ordered some appetizers.  I didn’t get a menu pic of the shrimp dumplings.  Sorry ’bout that. 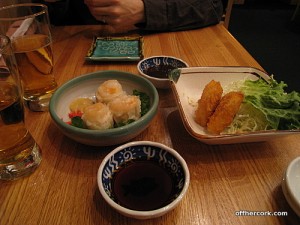 shrimp on left, pancakes on right

Some steamed shrimp dumplings and a fried vegetable and potato pancake to split. 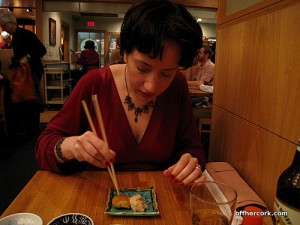 I will tell you this right now, I cannot use chopsticks to save my soul. I very awkwardly used my flipping chopsticks to eat the appetizer. And it never fails that Scott will try to “help” me every flipping time I come in contact with chopsticks. Then I get exasperated and say that I don’t need his stinkin’ Asian-Fu to help me with my chopsticks (Can you picture this scene? Let me help.). 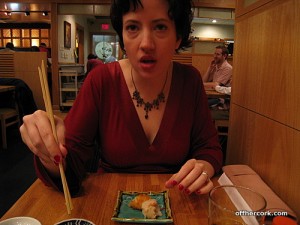 And then I pout because I can’t use them properly.  What can I say kids, I’m Polish and we generally use forks, fingers, and big honkin’ knives to eat.  I will tell you that even though it might have been awkward, I did use the chopsticks the entire time I ate the appetizers!  The fact that there was no other utensils around and our server was MIA does not factor in at all.

I didn’t care for the shrimp dumplings too much.  They were just okay but a little on the super mushy side.  The veggie potato pancake I loved!  It was like a mashed potato puff with veggies and a crust!  Awesome!  That I could dip in a tangy BBQ sauce, even more awesome!  I thought it was going to be more like shredded potato with veggies so I was surprised at the mashed.  Scott didn’t like it which was fine, more for me!  So we swapped, I took the pancakes and he took the dumplings.  I had 1.5 pancakes.  Which were sitting on a bed of shredded cabbage that then I piled on my wee plate, topped with the BBQ sauce, and ate like an animal.  Was that wrong?  I have no shame in eating garnishes if they are edible and I said as much to Scott as I was stuffing my face.  The cabbage?  No problem eating that with the chopsticks.  Nice large pieces of food not so much, but small stringy cabbage, easy peasy.  Go figure.  Then our food arrived, hooray! 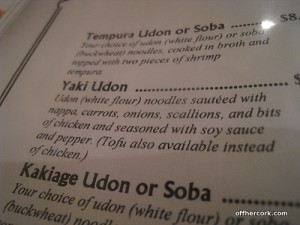 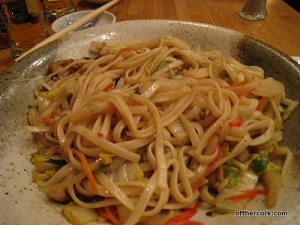 I got yaki udon, which is a dish we ordered the last time we were there and a gift from the gods because it is amazing.  There is plenty of veggie (of course there could be more but that’s just me being picky), little bits of chicken that are bite size and not something you have to wrestle with to try and cut or make smaller with improper implements.  And it is jam packed with crazy flavor!  It was at this point I asked for a fork because there was no way I could manage this dish with chopsticks.  And my server brought me out this little tiny baby fork, smaller than even a salad fork.  :p  I should have gotten a shot of it! 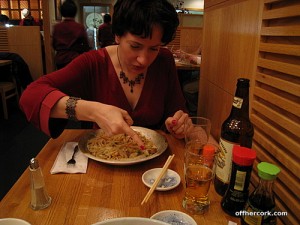 Then I scolded my chopsticks for being such a pain in my ass and isolated them to a corner of the table. 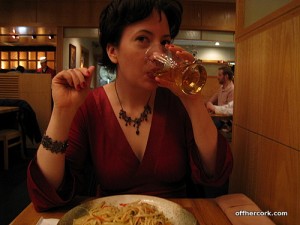 And because punishing them hurts me more than it does them, I had to calm my nerves. 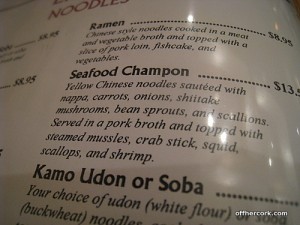 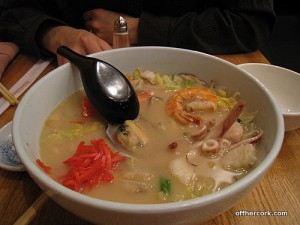 Scott got some sort of noodle dish with seafood.  I tried a bite and it was okay but didn’t have quite as much flavor as I thought it was going to. 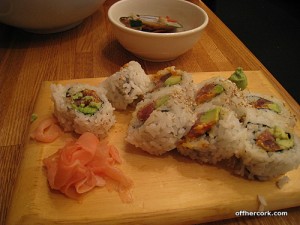 He also got some spicy tuna of which I picked off some of the rice because I like that part.  Not too much though because they didn’t have a whole lot of rice on them to start with.

I ate half of my udon and saved the rest to bring home.  Scott loved his sushi, said they make the best.  And that’s why we went there for his b-day dinner, he loves that place.  And I do too, it’s not expensive, you get awesome food and the portions are decent sized. 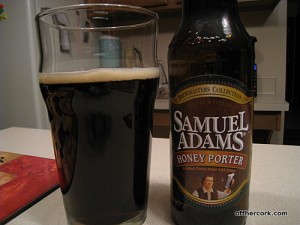 Then we came home to relax!  He busted open a honey porter and I had a few sips as we were sitting on the couch watching TV.  We started to watch a comedy show but the guy was horrible.  Holy cow he was not funny at all so we nixed it.  Then we watched Heroes, the first epi when it came back after break.  I don’t care for that show but Scott is still harboring hope it will get good again, so I watch it while hanging with him.  He’s a good guy for putting up with me because I roll my eyes a lot and curse at the TV, most especially at Claire because she is so dumb and annoying.  And way too made up, yikes!  Why do they put so much makeup on her, she certainly doesn’t need it.  And at 10:30 I called it a night and headed to bed!

Looking back, there is not enough pics of Scott in this post!  We are going to have to start working on getting more photos of us I think.

Today though is going to be an exciting day filled with yummy food!  There’s leftovers and then super special stuff for tonight!