Hi guys! I don’t know if it’s the weather or what but I was itching to do some major cooking today.  I finally succumbed and started around 3:30ish.  I didn’t make too much but I did do a new cornbread idea I had in mind and I made dinner. 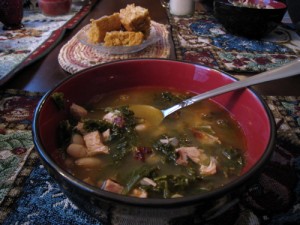 Dinner was smoked turkey and kale soup.  YUM!  One of our favorites and a winter staple.  This batch could have used more kale though.  There was a ladle and a half in that bowl but I only ate half of that.  And also half of one of those pieces of cornbread squares in the middle.

After dinner and cleanup I did yoga!  I bought the 45min version of Gentle Hatha #1.  Scott also did it with me!  He’s such a good guy.

It was awesome and now I’m totally relaxed.  Ahhh.  I’m headed in the kitchen to make some tea and then relax on the couch.

Tomorrow will be interesting running in all this snow. :o  It’s still snowing and we’ve bypassed 5 inches by far.  I have no idea how much we are supposed to get total.  We did not go to SF tonight.  No way were we going to head out when our road isn’t even plowed.  Our little hobbit Honda would be very angry at us.