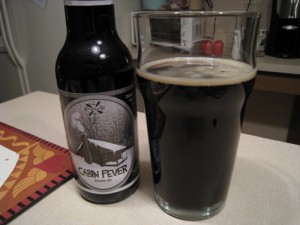 Hi guys!  Scott and I finished the first 24 last night.  And I did indeed split a beer with him, a Cabin Fever, one of my new loves.  Mmmm

I hit the hay at 10:30 last night.  I was wiped out!  We decided to try the earlier MT class which starts at 5pm and we might be doing that from now on.  It’s nice to get the evenings over and done with sooner so we can chill at home.  As much as I love all my training, I’m wishing we had more time to be at home in the evenings.  The holiday break really opened my eyes as to how much time we spend away from home in the evenings and how much I like being home vs. being away.  Yes Scott and I both work from home but even though we’re home, we’re still working.  We have an office and that’s where our time is spent.  The evenings is our chance to relax and reconnect.  When we’re out and about then our evening gets started later.  And sometimes that’s just a bummer.

Anyways, moving along I woke up at 6am this morning!  I thought about crawling back in bed since I am thinking about using today as an off day for running.  But decided that I needed that extra time even if I don’t run, so I got up.

Man it was cold out!  Rocky only went out to pee and came right back in. :p  Even with his big boy jacket on!  We are in single digits and are supposed to stay this way the rest of the week.  The high maybe reaching 20 but no more. 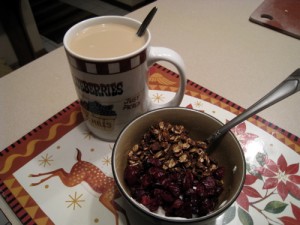 I made some chocolate granola yesterday and since I didn’t get to have yogurt + granola for a snack yesterday, I decided on that for breakfast today.

Love my new little bowls!  They are the perfect size for yogurt (and possibly ice cream as well!).  I had some 2% Fage with the chocolate granola, and some cranberries.  Along with coffee + creamer.  YUM!

I did some bloggy stuff and then did some stuff for Scott’s birthday.  The one gift I want to get is giving me problems.  Grrr!  I’ll figure it out, it’s just taking some time.

I have decided to take today off.  And it’s only because I ran on Monday.  I don’t think I can handle running the whole week, so today might just be a yoga day.  I’ll see as the day goes on.

I’ve mostly been puttering around the house cleaning and organizing.  It started snowing when I woke Scott up at 8:30 and hasn’t stopped.

The problem with eating breakfast at 6:30am is that I’m hungry way before lunch.  I’ve been having fruit.  Today was a pear. 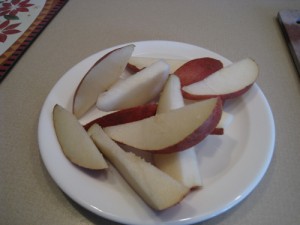 So good!  I haven’t had a pear in ages it seems like.  The grocery store has been having really poor pear produce lately.  So even though I’m hungry before lunch I’m trying to stick in the fruit area which is okay.  I don’t feel bad ever about eating fruit or veggies in large quantities.

I cleaned some more and did laundry and looked into some work related issues and it was finally time for some lunch. 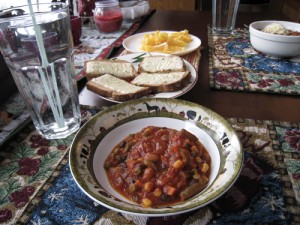 Remember the veggie chili we didn’t have last night?  Yup, that was lunch!  I was going to have it for dinner but I have some kale that needs used up, so that’s going to be dinner tonight.

There’s veggie chili, a slice of whole wheat bread toasted up with some pepperjack cheese and 2 oranges in the middle.  I had all of my chili, a slice of bread, and 3 pieces of orange.  Everything was so good and the chili totally hit the spot on this snowy cold day.

After lunch and cleanup we took Rocky for a quick walk.  We’ve got about 5 or so inches of snow and it’s still coming down pretty hard.  The roads aren’t plowed and I really don’t feel like venturing out in the snow.

Jammies, a hot drink + snack, and the fire on sounds like a good plan for this evening to me!