Warning: Parameter 2 to WPE\Site_Preview::the_posts() expected to be a reference, value given in /home/customer/www/foodembrace.com/public_html/wp-includes/class-wp-hook.php on line 303
 January 11th, 2009: Breakfast and Brunch | Food Embrace

Hi guys!  Last night I had a glass of red as we finished up the Pens game from Thursday.  It was horrible, let’s not discuss it.  Then we moved on to the 24 two-hour movie that was on sometime last year.  We figured since the show starts up again today that perhaps we should watch the movie.  It was pretty lame.  And there wasn’t much Bauer Power going on which is a little disappointing.  I did indeed have some chocolate! 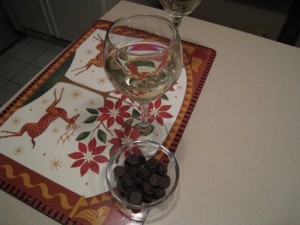 I had a glass of riesling (which was supposed to be more red but Scott picked up this bottle instead) with some dark chocolate chips.  Mmm!  I did not eat that entire bowl thankyouverymuch.  Although I could have.

I had a small handful, stopped when I felt like my sweet tooth was satsified.  And then I had another glass of white. :o  After the movie I got sucked into a King of the Hill episode and then Robot Chicken.  I tore myself away and called it a night close to 11:30.

I slept in till close to 8am.  Rocky was bugging and I was cranky because I had a monster headache.  Ugh!  No, not from the wine.  I had it last night as we were watching TV but I already had some wine so taking ibuprofen was out.  I was going to bed soon and I thought I could sleep it off (my preferred method because I don’t like taking pills).  I woke up this morning with it still there.  I was up for a while hoping it would fade away on its own. 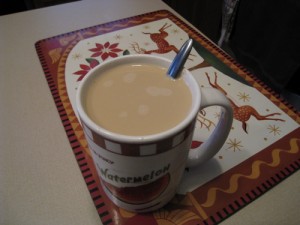 I had a cup of coffee as I tried to wake up and shake off the headache.  Everything is covered in ice and it’s below freezing outside so it’s not melting.  My Sunday morning run was out as I didn’t want to risk running on this ice.  It is killing me to be indoors!  The weather is beautiful outside.  Twenty some degrees but feels warmer with no wind.  Plus it’s Sunday so no construction guys.  The perfect morning for a run and I’m here inside because of ice.  Meh. 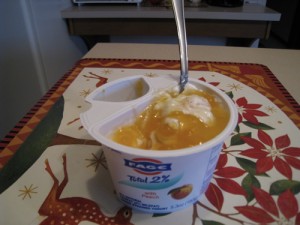 My headache didn’t go away so I ended up taking some pills.  Because I also didn’t want to take them on an empty stomach I had a peach fage.  YUM!  This is totally my favorite yogurt.  Oh I forgot to mention the coffee was peppermint this morning and it was also perfect.  Full peppermint action and super hot.  Awesome!

Since I couldn’t go out and about, I did get some stuff done around the house and work-related things that needed done.  I tried looking around to get some stuff for Scott’s birthday and I could not find what I was looking for.  Or I did but was unable to get it for whatever reason the site said.  OR I was going to get handed huge shipping charges.  I don’t think so.  That made me a little grumpy so I got up and headed in to make Sunday breakfast. 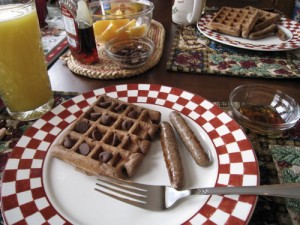 I was still craving chocolate a little so I made some chocolate cranberry waffles!   I had one waffle, two breakfast sausages, and in the middle are two oranges.  I put extra chocolate chips on my waffle and dipped it in maple syrup.  So good!  I also made Mi-faux-sas!  Half OJ and half mandarin orange seltzer.  Very fizzie and so good!

Scott’s cleaning up the kitchen and I’m about to go and get dressed for the day.  It would be nice if the ice melted enough so I could get Rocky out for a walk.  Then it’s laundry time and whatever else we decide to do!