Warning: Parameter 2 to WPE\Site_Preview::the_posts() expected to be a reference, value given in /home/customer/www/foodembrace.com/public_html/wp-includes/class-wp-hook.php on line 303
 December 7th, 2008: Lunch and Dinner | Food Embrace

Quickie post so I can get back to the couch! :p 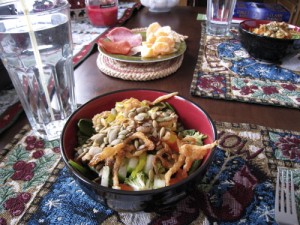 I decided to do salads for lunch today. They had:

Dressed easy with some balsamic and olive oil. In the middle are two clemmies, pepperoni and salami. I had one slice of each of those and some clems. Then I went back and peeled two more because Scott was hogging them all!

After lunch and cleanup, I started some laundry and we played Gears. Took Rocky for a walk in the snow, he was all excited.

Then came back and played more Gears and kicked the game. Woot! While we played we snacked on some kashi cheddar crackers and sweet potato chips. I don’t know what happened to my pic though! I had 3 sweet potato chips and 5 kashi crackers. We also had some blood orange Italian soda with it, I only had 1/2 a glass of that. After kicking the game, I fed Rocky and started making dinner. 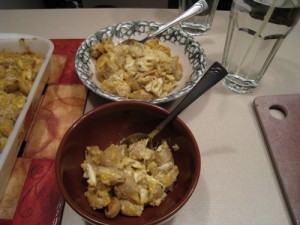 I still had some crab to use up, so I made some crab mac ‘n cheese.

The picture is disproportionate though! I only had like 1/2 a cup of mac ‘n cheese because I wasn’t really too hungry. Scott had over 2 cups of it, but for some reason the picture didn’t show the proportions well. We ate dinner while watching Heroes.

Now I’m off to maybe have an apple and try the horde mode on Gears. See you guys bright and early tomorrow!