Hi guys!  Man I slept for crap last night, I kept waking up and have no idea why.  Booo!  I wonder if it’s my jammies?  I had on my Grinch jammies but guys I have lost another 5 lbs.

That puts me only 15lbs away from my goal weight!  And 15lbs sounds so much better than 20lbs, I must say.  At any rate, the Grinch jammies are officially girnormous on me and I think I was getting a little caught up in them as I shifted in my sleep last night.  It might be time to retire them to wearing around the house and move on to other jammies for actual sleeping.

And yes I have lounging jammies and sleeping jammies.

If I’m home then I’m either in jammies or sweats because home = comfort for me.  Sitting around in jeans or anything other than jammies/sweats is not comfortable.

I got up a little before 8am this morning and it was so bitter cold when I let Rocks out for potty.  Wow! 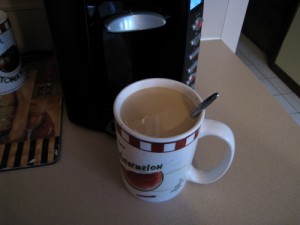 I wasn’t hungry yet so I poured myself a cup of joe.

Joe did not taste good this morning.  It seemed a little too sweet so maybe I added too much creamer.  And he also was not hot.  Sorry Joe, but I didn’t even drink 1/2 the mug before tossing him to the curb.

Read some blogs and watched some FoodTV where they put Nigella on at 8:30am which is a crime.  She should be on later so more people get to see her show. 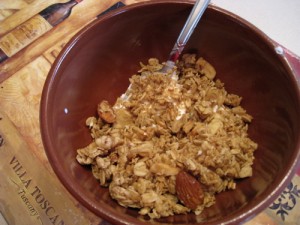 Eventually I got hungry and had 2% fage with some bear naked banana nut granola.  Love their stuff!!

Big day ahead with lots of running around to do.  Then hopefully a relaxing rest of the day at home.  See you later!