Morning guys! I ended up having a wee glass of red last night as we watched the Pens get their butts handed to them by the Sens. Damn what a crappy game. The only highlight was them finally getting a goal with like 1.3 seconds left in the game. Holy cow I haven’t seen them play that bad for a while. Boo! Oh well, at least they won the first game. 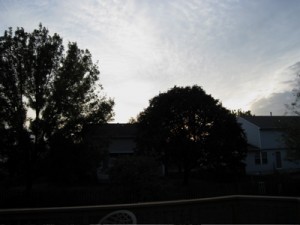 I was in bed last night by 10pm! And I mean sleeping, not reading. Wooo! I was wiped out. And Rocks let me sleep till 8am this morning, so that’s a good solid 10hours of sleep. Hooray!!!! We have been turning the heat on in the evenings now. Nothing too crazy but enough so that it doesn’t drop down in the 60s during the night, that’s a little too chilly for me. Today seems a bit overcast and gloomy much like the previous couple of weeks. I know it’s fall but jeeze, some sun would be nice. 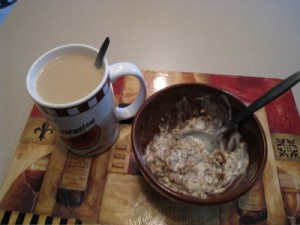 I was actually pretty hungry when I got up this morning. Honestly, I was a bit hungry last night while watching the game but I didn’t want to eat anything. I supposed I could have had some grapes or something. We’re out of bananas so it was a granola and yogurt day. I had 1/3 cup of homemade granola with 3.5 spoonfuls of vanilla yogurt. It was good but I’m missing the oats! Hopefully we can get to the store soon because I’m missing fruit and veggies as well.

I know this was a quickie post but I need to head out to PT. See you later!