Warning: Parameter 2 to WPE\Site_Preview::the_posts() expected to be a reference, value given in /home/customer/www/foodembrace.com/public_html/wp-includes/class-wp-hook.php on line 303
 October 5th, 2008: Dinner | Food Embrace

Hi guys! I did some laundry and plotted out my to-do list which was actually a task on my to-do list! :p I know I keep saying this, but I’m trying to get things more organized. I feel sort of like time is slipping through my fingers and I have too much to do and I’m afraid it just won’t get done.

While I was doing laundry and making some croutons (mmm!) I got a bit hungry.

I had 1/4 c of homemade granola with a couple scoops of yogurt. I did some more things regarding my to-do list and then Scott came back inside. He was out doing the last mow of the season and other assorted outdoor activities. By then it was going on 5pm and I decided to start supper. I flip-flopped on what to make and decided on spaghetti. We haven’t had that for a while and I knew Scott would love it (one of his faves) so I fully decided on that. Since my pasta sauce had some red wine in it, I pour myself a wee glass. 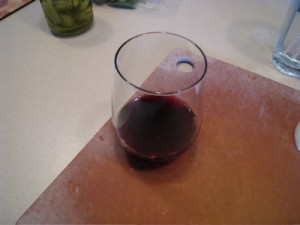 I set it aside and promptly forgot about it! I was too busy getting dinner started and getting Rocks fed. It wasn’t until Scott came back downstairs after his shower that I had a sip. I think I had three sips total. Yum! 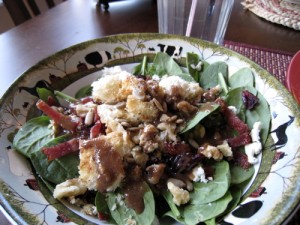 I made us small side salads, although mine was slightly larger because I wanted salad more than I wanted pasta! It was:

And then the main course!

The sauce had diced tomatoes, onions, green peppers, pepperocinis, kidney beans and a mix of hot and mild Italian sausage. I had half a slice of garlic bread along side the pasta which was WW spaghetti. Scott cleaned up while I called my mom. Now that I’m in my jammies it’s time to watch the Pens game that we taped this afternoon. Then off to bed! Sorry the post is short but not a lot happened today and I want to get the game started.