Warning: Parameter 2 to WPE\Site_Preview::the_posts() expected to be a reference, value given in /home/customer/www/foodembrace.com/public_html/wp-includes/class-wp-hook.php on line 303
 September 24th, 2008: Dinner | Food Embrace

Well my apple chips were a bust. Boo! I might have over cooked them or over dried them or whatever. I’ll give it another go and if I still don’t like them then I’m considering this particular experiment a wash. I did some site stuff instead of cleaning and organizing around the house. Which will then force me to do it all tomorrow. I don’t usually procrastinate but I’m all over it today for some reason.

I started getting a little munchie in the afternoon and decided to have some Kashi crackers. 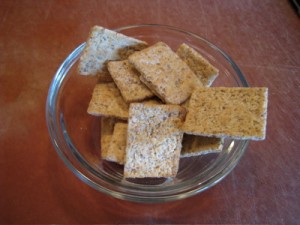 Those did the job until it was time for me to start supper. I wanted something filling but something loaded with veggies. I’m on a huge veggie kick this week and since we’ve been having meat so much lately it was time to take a break. Dinner ended up being ready way before I expected it to be. When I told Scott he said, “That’s okay!”

Me: Are you hungry?

:p The office is directly down the hall from the kitchen so it’s no problem for us to hold conversations with each other even though we are on opposite sides of the house. I figured he was hungry because as I was cooking, I kept hearing, “Hey that smells good!” “Really, it smells awesome.” 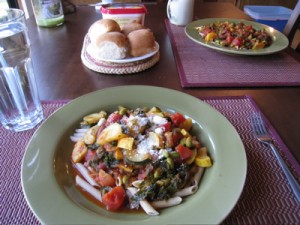 As in “everything but the kitchen sink”. I do this a lot either with pasta or rice, just make a dish and toss in whatever I have on hand. I know that plate looks huge doesn’t it?! It’s actually only about 1/2 cup of whole wheat penne with the sauce on top. I piled on the sauce because I wanted the veggies. :p I made a basic tomato sauce with a can of diced toms and a can of tomato sauce and seasonings. To that is some sauteed onions, green pepper, and a jalapeno. The add-ins are chopped zucchini and summer squash (told you, obsessed with squash!), the leftover kidney beans from lunch yesterday, edamame, and a couple of handfuls of chopped kale.

I left about a 1/3 of my plate and yes that is a wee bit of grated parm on top there. I also had 1/2 a roll with about 1/2 tsp of butter on it. And lots of water because it ended up being more spicy than I thought it was going to be! It doesn’t take much for me to think something is spicy.

After I was done chopping up the jalapeno, I forgot to wash my hands. I just moved on to chopping up the other stuff. Later on I scratched my chin and within seconds it was burning. “Why is my face on fire?!” Duh! I remembered about the jalapeno. It was so bad that I opened the fridge and smooshed my chin up against the door for relief. What a doofus. :p

Scott’s wrist is still bugging him and SF class on Monday didn’t help it much. So we’re both taking tonight off. I’m calling the doctor tomorrow to set up an appointment for him. Have I mentioned his wrist before? We were at MT class and he was working on the heavy bag and caught it funny with a punch and jammed his wrist. I think he sprained it because it was swollen and lumpy for a few days afterwards. We should have made an app right away but he was being a guy and knew “it would get better” on it’s own. So it’s not better and tomorrow I’m calling to get him an appointment. 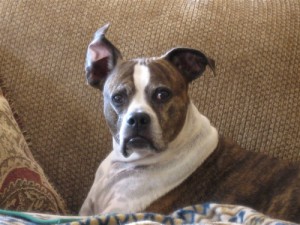 Last I leave you with this pic of my baby.

He likes to sleep with his head all mooshed up against the pillow on his couch. When he hears something and lifts his head quickly sometimes he gets what we call “big ear” and it’s when one of his floppy ears decides it wants to stick up for a bit. Scott came back in the house from checking mail and Rocky heard him and got big ear. I happened to have the camera right next to me so I snapped a pic. I love when he gets big ear. He looks so cute!