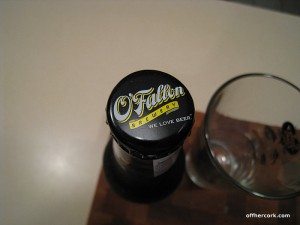 Here we are friends, we’ve reached the last Pumpkin Beer Review of the season!  Are you excited?  A little sad?  I’m a little sad but also since this segment seemed really popular, I’m pretty sure we’ll see more pumpkin beer talk next fall!

O’Fallon’s Pumpkin Beer is on the chopping block today.  We spotted this beer in the grocery store and didn’t really pay to much attention to it.  I think the label seemed a little generic and so we just kind of passed it over.  However since we needed beers for Pumpkin Month and we hadn’t tried this one before we bought it to give it a whirl.

Did O’Fallon’s hold up or was it O’Failin’? 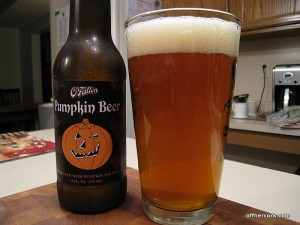 The smell doesn’t overwhelm you but there is a nice cinnamony scent that lets you know this is a beer with some spice to it.  It doesn’t knock you over the head but it is a really nice start to the beer.  Very heavy on cinnamon with a hint of nutmeg.

This beer has a nice color too it!  While it seems light, you cannot see through it.  It’s cloudy, which I like to see.  It also had a nice orange tint to it, and for a pumpkin beer that makes for a great color!

For a lighter ale, the head on this was amazing.  It was bright white, large, and maintained it’s shape and size for an extremely long time.  Even several minutes after we started drinking, while the size did go down, some form of the head still remained.  Perfect!

Three pumpkins, this is a first this month!  I would actually give it 3.5

if I had a half one to show!

We had to sample this beer twice so we could have an accurate assessment.  My initial impression was that it was not very good.  However after having sampled some other subpar beers and then trying this one again, I realize my first impression was too hasty.  This pumpkin beer actually isn’t bad.  It’s not a powerful spicy ale but it does have a nice spice flavor to it that continues through to the finish.  The finish is has almost a caramel graham cracker taste to it.  Not overpowering, very subtle but it’s there.  This is what I like in a pumpkin ale, I want a flavor to the finish because that makes the beer.  A spice start is okay but if you lose it too quickly, the beer will fall flat.  This beer, you get a lovely cinnamon smell at the start and the slight spice at the end.  It’s a nice beer and is best served very cold.

I would drink this beer again and I would order it out if it was offered.  Would make a nice beer for someone just starting to drink some pumpkin ales.

Have you ever had O’Fallon’s before?  What did you think?

What did you think of the beer reviews for Pumpkin Month? Should we do it again?