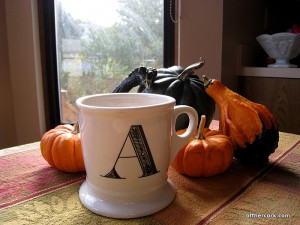 I wish that I could say that yesterday ended up being as relaxing as I hoped but it didn’t quite reach that level.  Don’t get me wrong, it was a nice day!  But not enough got done and the day went by too fast.

I always have the Sunday blues.  It’s the one day I have with Scott where we hope to have nothing on the agenda.  Sometimes we succeed and sometimes we do not.  No matter what though the day always seems to fly by at lightening speed.  In the blink of an eye it’s 3pm and time to start thinking about phone calls to family, making dinner, and settling down for the evening.

Yesterday both of us had some work that needed to get done and sadly most of our day was spent doing that.  Booo for working on the weekends!

As you know, I decided to take a Me Day yesterday and just chill out doing what needed to be done on my own time.  I did try and make some pumpkin bread but that turned into a Baking Fail of monstrous proportions!  The pumpkin bread was in the oven at 375 for over two hours and the silly thing would not cook all the way through.

To put it in perspective, roasting a whole chicken at 375 wouldn’t even take two hours long.  Sometimes pumpkin can be a tricky one to work with because it is very thick and that can affect baking time greatly.  Yesterday it just did not want to work.  I was left trying to figure out what to do about breakfast though because that stinkin’ bread was supposed to be breakfast!  I bought some fresh local apple cider on Saturday and decided to make some cider corn cakes. 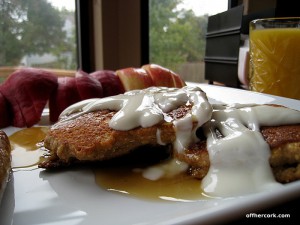 Mmmmm! I am starting to get a serious pancake addiction going on.  I just love them so much!  I love making them and coming up with new flavors but I especially love eating them. This is a new thing for me because while I always liked pancakes, I never really LOVED them.  Now that I make them on my own, I can’t get enough. 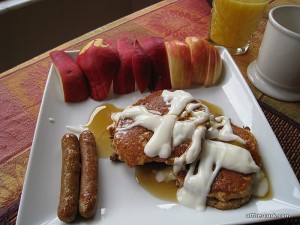 I top my pancakes with a bit of butter and then drizzle on some yogurt and maple syrup.  Heaven!  We also had some chicken sausage and fresh fruit.  I had a red pear and a few slices of apple.  I bought some Honey Crisp apples over the weekend, also from a local orchard.  They are so so good!  They taste exactly like what you would think an apple should taste like.  I call them cider apples because they taste like a big glass of cool apple cider.

After breakfast and kitchen clean-up we walked Rocky and it was so cool outside! I had to put on sweats and a sweatshirt.  I am so excited for this time of year again!  I don’t mind telling you that I have already bought some Christmas cards and cute little winter themed tumblers with Christmas trees on them.

We worked and worked and then it was time to call it a day and make dinner.  Typically on Sunday I know exactly what I plan on making for dinner but yesterday I had no idea!  So many things sounded good that I was having trouble picking just one.  I looked to the weather for inspiration.

It was cold and gloomy, it was supposed to be a relaxing day so I turned to comfort food for the answer. 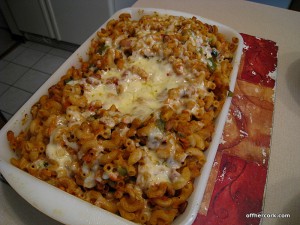 Hello Mac ‘N Cheese!  Spicy Mac ‘N Cheese to be specific.  I put a few twists on this one, I added in some shredded carrot, shredded zucchini, and some pinto beans.  I also used unsweetened coconut milk instead of plain soymilk. 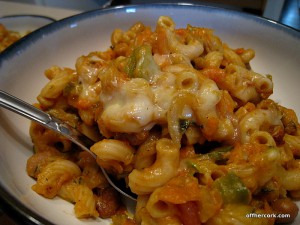 A big huge steaming bowl of mac ‘n cheese was perfect for yesterday!  Normally we eat Sunday Supper at the table but yesterday we curled up with our big bowls of pasta and hit the couch.  We watched a new show called Undercovers.  It’s a show about a married couple who are also CIA spies.  Created by J.J. Abrams so it makes it wonder if he’s missing Alias a little bit (aren’t we all?).  The pilot was actually really good and I’m curious to see if the show can keep up the momentum.

After that we tried some movies.  First up was 9 that I couldn’t even get through.  I think maybe I managed to watch the first half hour before calling it quits.  Yikes!  Then we switched over to Ninja Assassins.  Now going into that movie I knew it wasn’t going to be anything great.  I realized that but wow it was bad.  Not even the fight scenes could redeem it!  That was a waste of my time.  Bah!  This is why Scott and I stick with watching old movies because everything out now is just junk. 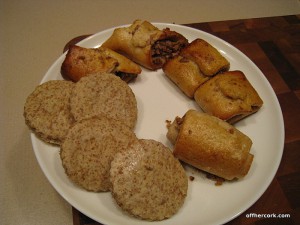 We finally switched to something a lot more entertaining, Holmes!  And I saw that starting next week it will be back to two Holmes shows back-to-back.  Hooray!  We nibbled on some sugar cookies and nutroll while sipping on some Barefoot Pinot Grigio.

Then I finally kicked it up to bed because I was spent!  How was your weekend?  Do you feel Sundays go by too fast as well?  Do you get the Sunday Blues?

This post was part of Homespun Sundays.  Let me know if you join in too!