Hi gang!  Yesterday turned into a scorcher of a day!  All of the lovely cooler weather we were having last week is now gone and we are back to regular hot humid Ohio summer.  Yesterday was a totally fabulous day!  I got up early and did a run.  Nothing too long but just enough on my legs because I did yard work on Saturday and planned to do more yesterday as well.  I didn’t want to wear myself out too much!

Surprisingly after my run, I wasn’t too hungry at all.  I knew I needed a little something though so I opted for fruit, yogurt, and a little bit of granola. 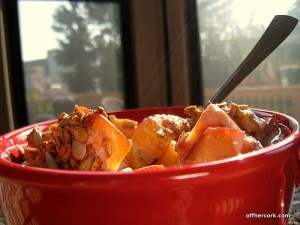 Two nectarines which probably could have been a little more ripe, some yogurt, and some homemade granola sprinkled on top.  Yummy and enough to tide me over till breakfast!

Normally Scotty sleeps for a mega long time on Sunday but because I knew that I wanted to get some yard work done and spend time with him, he was going to have to put sleeping-in off till Monday.  I woke him up and we got started on our day.  Over coffee we planned out just how we wanted to approach things and had a sort of timeline in mind.

I got all the stuff for dinner prepped and ready to go.  We were having ribs and they needed to get happy with a marinade of sorts.

Sunday Breakfast was a quick and easy one! 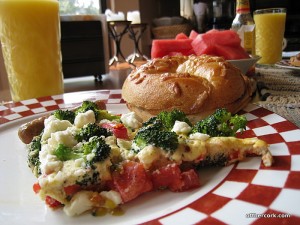 An easy fritatta with broccoli and tomatoes then topped with a sprinkle of feta cheese, an asiago cheese bagel because sometimes you just need the white goodness, and fruit on the side which was watermelon.  Yum!  There’s also some sausage on my plate that I ended up not eating.

After breakfast and once the kitchen was cleaned up it was time to tackle the front yard.  I might have mentioned before that the previous owners loved landscaping.  Which is fine but what they picked is time consuming and not at all to my taste.  Over the years that I’ve lived here I have slowly been going through and removing most of it.  I haven’t replaced anything yet only because I want it all gone first and then I’ll decide what goes in.  Trust me when I say this does not in any way leave my house barren and totally exposed.  We have a crap load of pine bushes and trees planted around the house.  They are too big for me to move and too large to move without having a plan in place.  I don’t really care for them either but those will all get dealt with at another time.

In fact there are only three things I like that they planted, a magnolia tree in the front, a boxwood by the deck, and a regular tree in the back.  We also have a cherry tree in the back that if it wasn’t so big already would have been long gone.  Fruit trees = pain in the tukiss!

I wasn’t out there for too long, about three hours, and I didn’t even get to do everything that I wanted to do!  But a good bit got done and I’m happy with that for now.  It was crazy hot though!  I was sweating buckets.  We had water out there with us to keep us hydrated but whoa with the heat!

I came in, showered, and got the ribs in the oven.  I start them in the oven and finish them on the grill.  While they were cooking I realized that I was really hungry.  I munched on some watermelon as I waited for Scott to come back in.  When he did, he said he was hungry too.  Well we had some time on our hands because the ribs just hit the oven so I made something to tide us over till dinner was done. 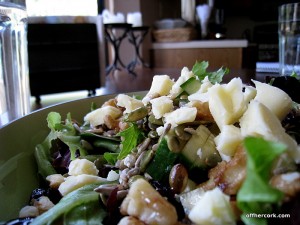 Man but I love salads!  Thank goodness I can eat one everyday!

This was a super simple one:

Topped with balsamic, honey, and olive oil.  Yum!  So good and totally a great way to start an awesome dinner!

Scott and I had some white wine fizzies (splash wine + seltzer) while he prepped and got the grill ready.  I had every intention of taking pictures but lord it was hot.  I was sweating just sitting on the deck!  Therefore no pics because I was being lazy.

The ribs turned out pretty fantastic!

I rubbed them down with yellow mustard and some worcestershire, plus a combo of seasonings and let them sit all day long.  Then at a low temp I cooked them with a bit of chicken stock till they were just about done.  After that it was time for the grill!  Topped with homemade BBQ sauce, they got even better. 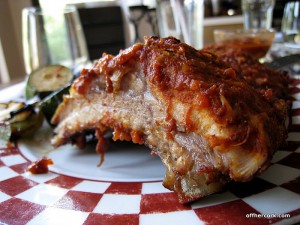 You all know I love pork and ribs have to be just about the greatest thing ever.  Mmmmm! 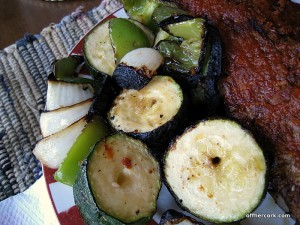 On the side was some grilled:

That sat in a teriyaki marinade for a bit.  I adore grilled green peppers and onions.  Like in a big way!  But interestingly enough I like them better with steak I think. 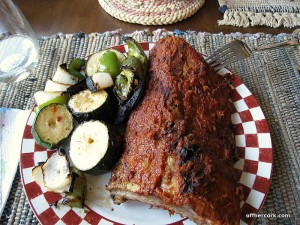 Yes that is a half rack of ribs.  No I did not eat that entire thing.  Have you seen me?  I cannot put away that much pork!  In all honesty, I probably had four ribs total.  These were some meaty ribs!

We had to eat dinner inside because it was just too hot outside.  I was bummed by that as I adore eating on the deck but such is life.  After cleanup I had to take another shower since helping with the grill caused me to sweat buckets again.  Goodness!

Once that was all said and done we sat on the couch and just watched some TV.  We remembered Holmes came on at 8pm (Brandi, did you see it?!) and watched that.  Then it was time for some comedy that we watched on Netflix streaming.  It was too late and I was too tired to get involved in a movie or something that needed my attention.  I really just wanted to veg out.

The wine for the evening was something we saved specifically for our anniversary.  We purchased this last summer during our trip to Inn at Cedar Falls. 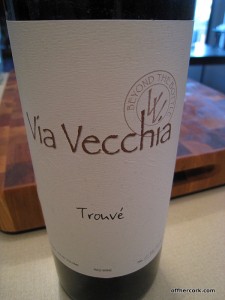 It’s a red wine made by a local winery here in Ohio and it is amazing.  Very dark and deep and intense.  You know you’re drinking a red for sure when you sip this.  Then I started falling asleep and headed up to bed to crash out.

Yesterday was a great day!  How was your holiday?

This post was part of Homespun Sundays.  If you would like to join in, just let me know!

4 thoughts on “Weeds, fireworks, and ribs”

Leave a Reply to Mara @ What's For Dinner? Cancel reply