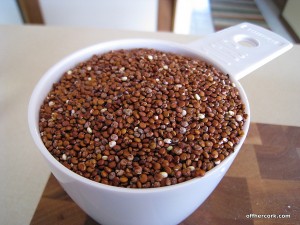 Quinoa has been taking the foodie blog world by storm lately.  It started with a few rumblings and now it’s all over the place!  Quinoa is pronounced Keen-Wah but I’ll tell you a little secret, I pronounce it like Quinn-OH-AH because Keen-Wah does not flow well at all to me.  Quinn-OH-AH is easier to say and sounds more pleasing to the ear.  I try to pronounce it properly when in polite company but sometimes I slip up.  If you ever hear me say it like this, don’t judge.

Nutritionally, quinoa might be considered a supergrain–although it is not really a grain, but the seed of a leafy plant that’s distantly related to spinach. Quinoa has excellent reserves of protein, and unlike other grains, is not missing the amino acid lysine, so the protein is more complete (a trait it shares with other “non-true” grains such as buckwheat and amaranth).

It’s taking over and sort of revolutionizing diets here in the West.

Please note, by diets I do not mean society’s definition of “diet”.  I mean the literal definition of diet; the typical intake of foods.

I’m always looking for alternative sources of protein since I don’t eat a great deal of animal protein.  I also love learning about foods and want to expand my knowledge and my cooking experience, so I decided to give my try at quinoa.

It’s really easy to prepare, exactly like you would a basic white rice.

It cooks up in the same amount of time as a basic white rice (I am talking actual rice here, not Minute or your Uncle’s rice that comes in a box), which is really quickly.  The grain/seed/pod/thingie sort of sprouts a tail as it cooks. Sounds weird but is totally cute.  I promise.

I learned that as a side dish or a base for something, like roasted veggies. I actually can’t stand quinoa.

The texture is very small and not something that I enjoy.  It’s very plain tasting even if you use a broth/stock to cook it in.

Well that bummed me right out.  Here I thought that I found a great new protein source to add to our diet!  The quinoa sat in my cupboard for a while, unused and ignored.

Then I saw someone do something with quinoa utilizing it in a totally different way and it blew my mind.  Honestly, I was amazed and the light bulb went off.

Duh! Why didn’t it occur to me to use it in other applications?

Since then I’ve been buying quinoa in bulk at Whole Foods because now I’m in love with it!  Once I realized I can use it in so many things and it doesn’t have to be just a boring side dish, I fell head-over-heels.

I realize I’m a month late as last month (March) was technically Quinoa Month, but this month I will be featuring this grain/seed/pod/thingie here on OHC and sprinkling recipes and tips throughout the month.

10 thoughts on “Quinoa Month on OHC”