Hey gang!  OHC coming at ya super early today!  Scott and I are going out later tonight to check out Birbigs in the house!  Wooot!

Any other Mike Birbiglia fans out there?  Holla!

We bought the tickets back in like June or something.  At the time I remember thinking how far away October seemed and now it’s here!  Holy quick year, time is flying by!

And since I’m not sure what we’ll be eating before and after, along with getting home too late to post, I’m tossing this up now.  Tomorrow’s post will be a long one I’m sure because I’ve got so many things going on that I’m one busy sister on Friday!

But let’s back the train up a bit.  All those carbs did nuttin’ for me yesterday and after SF class I was hungry. 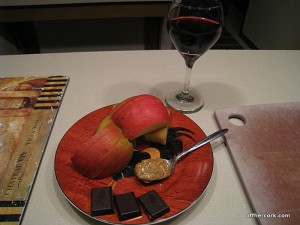 A honeycrisp with some PB, dark chocolate and a small glass of red.  I took one sip of the wine and realized I didn’t want it, so I didn’t drink it.  The chocolate, however is my newest obsession!  Holy crap this was dark chocolate with sea salt and it was amazing!  Perfectly salty savory at the end, it was almost like a chocolate covered pretzel without the pretzel.

I actually only ate one square of it but I wanted the whole bar.  I will of course be having more of that bad boy today which was the only way I could restrain myself last night. :p  I took my bedtime snack upstairs to the heating blanket and kicked it with my book.  Scott actually had a conference call last night from 9:30-11:30.  Ew!  The joys of freelance.

I have to say that this dark in the morning bidness is starting to get to me.  I hate running in the dark but I have to get moving because I’ve got stuff to do.  No dilly dally!  I was out the door by 7am this morning and shiz gang it was cold.  Frost and Rudolph red nose kind of cold.  BRRR!  I had to wear my running hoodie (love it! By Nike) to help keep me warm.  Chillz!

However it did not stop me from cranking out 5 miles at slightly over a 10min/mile pace. 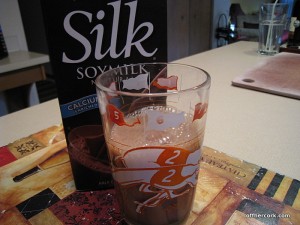 After a quick class of CS for recovery and to help stop my bellah from making unladylike noises, back out with Rocky-loves.  I had to put a heavier jacket on for that.  Goodness!  When we got back home I stretched and tried to warm up.

My shower was delayed because we’re going out later and I try and shower close to when I need to start getting ready.  I feel fresher that way.  I was all bundled up and had the space heater going but I was chilled to the bone.  Even my glorious breakfast didn’t help. 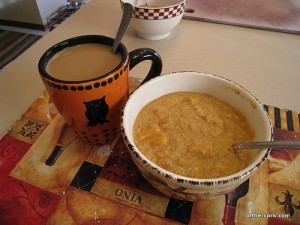 I was a hungry beast this morning.  All I wanted was to stuff mah face with a huge bowl of oatbran.  This had pumpkin and my last nectarine in it.  Honest to goodness this was heaven.  My new pumpkin bowls are two quarts and my oatbran almost filled it up.

I told you I was hungry!

Eventually I decided to just suck it up and shower because I couldn’t stand being cold anymore.  When it’s cold outside and I workout, afterwards my sweat makes me cold.  And unless I shower or take a bath, I will stay cold and nothing helps.  Because I’m cold deep down inside (does this even make sense?), only soaking myself in lava will take it away.  Warm drinks and heat do nothing.

After breakfast I cleaned the house and got some other stuffs taken care of.  Then I made some lunch because again with the needing to stuff my face. 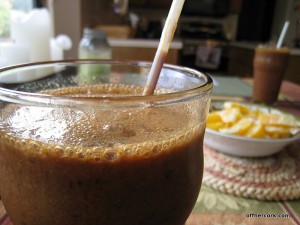 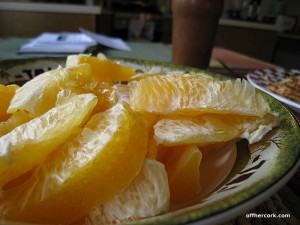 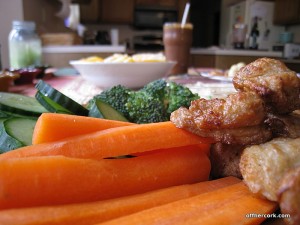 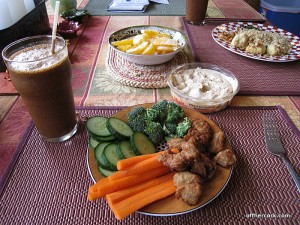 With some hummus for the veggies iffin’ I decided I wanted some.

It was late so I just really wanted to pick at stuff.  And truthfully, sometimes I just like munching on veggies like that.  There are times when I eat like this that I wonder if some people see that and think, “Oh my gosh is that all she’s eating?”  But I promise you it’s exactly what I want and sometimes I just want to eat raw veggies that are not in salad form.  I like the crunch factor and being able to pick at my plate.  And I just like veggies! :p

And now I’m off to go make myself purty!  Catch you tomorrow guys!