Hi guys!  Yesterday Scott and I totally lazed around and it was glorious! We were both just tired and wanted nothing more than to chill because we had been going and going for a few days.  We busted out a game, Army of Two, and played for a bit.  While playing there was a snack! 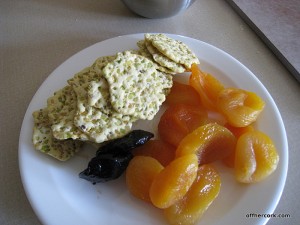 Dried apricots, two prunes, and a few pistachio chips.  I had the two prunes, 3 apricots, and a few crisps. I totally should not have even had this snack.  I was a bit munchy and didn’t want to eat supper early so I thought a snack would be good.  But it made me feel a little bloated and yucky.  I hate that bloaty feeling!  My hunger didn’t come around until after 8pm. Some snack, eh?

Regulars know that Thursdays mean Pizza(!!) here at the HQ.  I thought about ordering pizza out but didn’t feel like spending the money or gas to drive and pick it up.  I really wanted to make a pizza but I didn’t want to do all the prep work and we also had no dough.  I’m a little gun shy on making my own dough because the last few times it didn’t work out.  I was going to make something else entirely for dinner even though it wasn’t what I really wanted.

But then on Twitter, so many people were talking about pizza that I sucked it up and tried a new dough recipe.  Once I saw that the dough was indeed rising and not being a dinkus, I prepped all the ingredients.  Then I cleaned up the kitchen all while the dough was growing up. 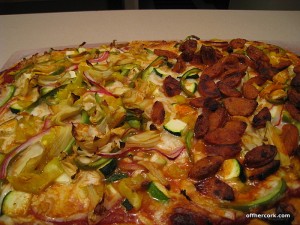 The most amazing pizza was born!  The dough was perfect and I can’t wait to try it again next week so I can officially talk about it.  It was a combo of WW flour and all-purpose flour.  It was light and fluffy and chewy with a crunchy bottom.  Glorious!  My side is on the left and Scott’s is on the right.  Pizza toppings:

My side was lighter on the cheese and topped with garlic chili hot sauce while Scott had regular hot sauce. 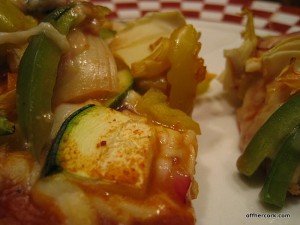 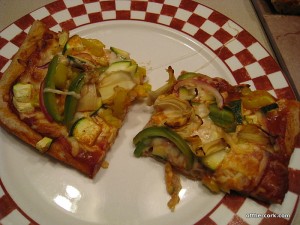 I started off with two pieces and ended up eating another 1/2 slice.  So good! 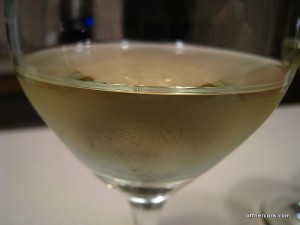 While watching some TV I sipped on a glass of white.

Then I conked out in bed and called it a day.  Love Pizza Thursdays!