Hi guys!  Let me start off the recap with a treat on Monday night.  After SF class I was starving! Sometimes I’m a little munchy, but that evening my belly was growling. :o  So strange!  I decided to finally jump on the banana ice cream train and try it out. 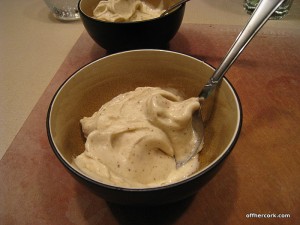 It took a little coaxing but the bananas finally started getting creamy and fluffy.  I just had to make sure to hold onto the food processor so it wouldn’t fly away!  I took a small test bite and decided it needed some umph so I added a small spoonful of vanilla almond butter for some extra flavor and also extra staying power for me since I was so hungry.  Both of us loved this stuff!  It was creamy cold and had the exact consistency of a great ice cream.  Basically it’s the bomb and I want to purchase a bunch of bananas just for freezing.  But it does taste exactly like bananas.  I guess I was expecting it to taste like vanilla ice cream with the way everyone was raving about it.  It tastes like banana ice cream.  The amazing part is that it’s just bananas and nothing else.  Frozen bananas to give you that creamy fabbo texture.  A huge hit with us and we will be making it again for sure!

Then I hit the sack because I had an early wake up call.  I got up at 6am so I would have time to drink some coffee and eat a huge bowl of oats before leaving for the training site.  I didn’t run because I didn’t think I would be able to squeeze one in but naturally now I’m thinking that I probably totally could have. 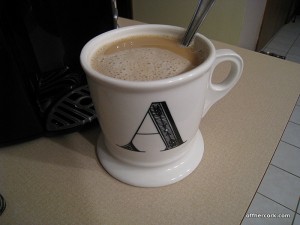 Coffee first because I was dragging! 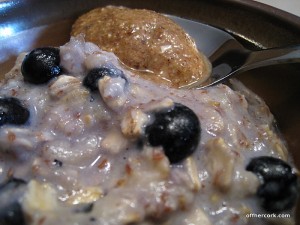 Hello oaty oats!  Blueberry oats with a scoop of vanilla almond butter for extra protein and staying power.  After eating, I was told to dress in old clothes and layers because they might get wet, stained, ripped, and so on.  And also to wear a bathing suit as a base layer.  Well I don’t have a bathing suit so I wore a sports bra and spandexy type shorts.

Is there someplace I can find a sports bra that doesn’t make me look like a 10year old girl?  Dang! I know we need the support but I don’t need the mashed down into nonexistence look.  Jeeze.

Next layer was a tank top then an old SF shirt that was too big on me.  And a pair of camo shorts because I wanted the extra pockets to hold my cell phone and extra things. 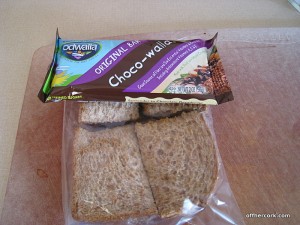 Like this PB sammie (on whole wheat bread) and Odwalla bar!  We were told that they would be providing lunch for us but we all know how that goes right? Always have a backup plan because what they serve might not be what you want and/or can eat.  Those were my backup plans.

I would be missing the fruit and veggies for sure but a PB sammie is an easily portable stowaway meal.

I was the first to arrive because the instructions said to be there by 8:45am so I was and it was just me and the medics and the police. :p  I got introduced because the Lieutenant of the medics (which is under Cbus Fire Department) is my SF instructor.  Then I sort of just hung out and texted with Scott while waiting for further instructions.

I was to be victim number one and I had a gun shot wound on my right shoulder that was a through and through. Meaning I had an entrance and an exit wound.  I got my wounds applied and makeup put on my face to make me even more pale than I already am.  I checked myself out in the mirror and I looked like a zombie! It was so totally cool and there was a small part of me that wanted to bust out into some Thriller dance moves.

You would have too! So don’t even front!

More people started showing up and I was able to start chatting with those that I knew.  One other guy from our SF school was there and I chatted with him most of the time.

It took a long time to get started so most of the morning was spent just talking with different people and things.  Then we ran through the first scenario.  We were in  a middle school cafeteria and there was one shooter who came in and shot the place up.  SWAT arrived, they exchanged gun fire and the shooter retreated and they had to go get him.  I don’t know if you’ve been around guns before but they can be loud.  When Scott and I go to the range we have to wear something over our ears.  Well there’s none of that for training. The shooter had an assault rifle (AR, Which was pretty sweet!) filled with blanks.  In an open cafeteria that’s a freaking loud shot, let me tell you!  SWAT then cleared the area and moved us out of the school.

I was out sitting on a bench with my wound and another guy from the fire department walks over and told me to pass out and not say anything to anybody.  I do what the guys in blue tell me to do, so that’s what I did.  My wound got dressed, I was loaded onto a stretcher and taken away in the ambulance.  Then they told me I was all healed and could wake up. :p  My shirt I was wearing got totally destroyed because they cut it off.  I was laying there and the medic leans over and whispers, “Hey, I know you’re not supposed to talk but it looks like you’re wearing a tanktop under your shirt. Is it okay if I cut it?”

I nodded and then we both laughed.

After the first scenario, we were debriefed and then it was time for lunch.  There was pizza, cookies, and chips.  Hooray for my PB sammie!  I ate that, texted with Scott, and then chatted with my friend from school.  They were serving water and I downed a bottle of that too.  Then it was time for the second scenario!

Same wound but I had to go find another shirt since my first one was destroyed.  The wound got touched up, more blood added, and more makeup on my face.  This time some of us were up in a library and there were two shooters.  Same drill, SWAT came in and cleared the area and took the shooters out.  Got us to safety and the medics took over.  This time I wasn’t passed out but was supposed to have no feeling in my arm, couldn’t move it, and there was no pulse. Yikes! We had lanyards with cards around our necks and the cards had our instructions and vitals written on them. My card said “No PMS….” and in medic speak I have no idea what that means.  So as the guy was reading what was on my card out loud, I said, “Well since I have no PMS at least you know I’m not cranky.”

It took him a second to understand what I was saying but the other medic got it right away.  Might as well have fun while you can, right?

After the second training and small debrief we were allowed to go home.  But the best part? I could take my wounds with me!!!  Hells yes!  We weren’t allowed to have cameras on site so I couldn’t get pics till I got back home. 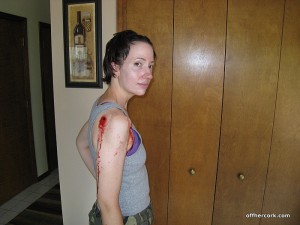 Sexah! Remember I have makeup on, I’m not really that pale or blue looking, mmmkay. 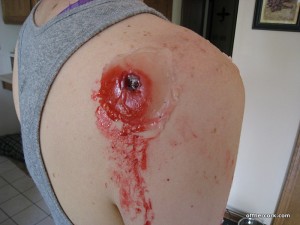 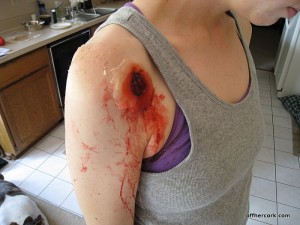 And the exit wound!  Since I was sporting these for hours and they dealt with being bandaged, clothes ripped off and so on, they are looking a little rough.  But it was pretty well blended in and looked like an actual wound at the start.

Are you loving it?  It was a totally awesome experience and I would do it again in a second.  I took my wounds off and stored them in a baggie.  Then I washed my shoulder area to get the sticky blood off.  Man that stuff is like glue!

After I was cleaned up, I had to make a smoothie right away!  Scott who was on his own for most of the day also only had a PB sammie for lunch. I can pull that off because it fills me up just enough in a pinch.  My husband who is a big guy (tall) and has the metabolism of a cheetah cannot. I don’t know why he does that.  So I made a huge smoothie for us: 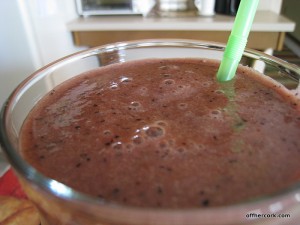 Heaven! And very much needed!  I was still hungry so I had another snack. 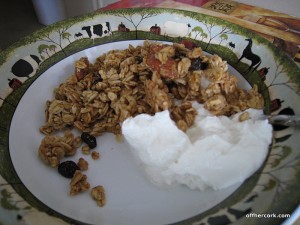 Then it was off to MT class where I worked it hard!  I was totally ready to stuff my face when we got back home so I made a huge dinner. 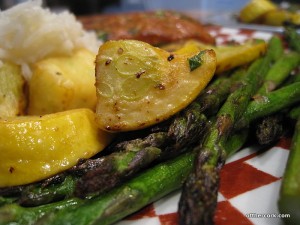 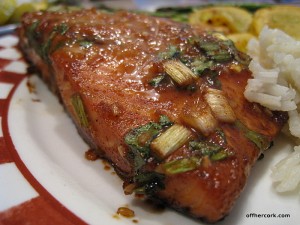 Salmon that was marinated in teriyaki, hot sauce, spices, green onion, and cilantro.  Then squirted with lime juice right before cooking. 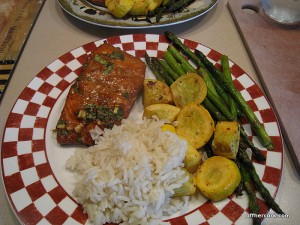 And some plain jasmine rice because it cooks faster than brown and I wanted to EAT!  Normally I don’t have that much rice, if any at all, when I make rice and fish but I needed to make up for what I missed during lunch.  And make up for what I burned at MT.  I kicked that plate save for a few bites of fish.  YUM! 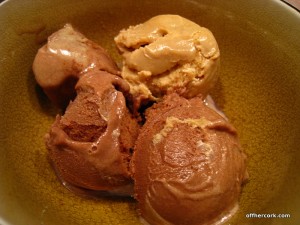 Later as I was watching TV I still wanted a snack and took this opportunity to have a bit of dessert.

Frozen yogurt!  In the bowl are two scoops of chocolate and one scoop of coffee.  I don’t like the coffee flavor but it needed to be used up.  I took one bite and gagged. It was so antiseptic tasting it was awful.  Scott took it out and gave me another scoop of chocolate instead.  I ate that up, licked the bowl, and then headed off to bedtimes.