I started this post yesterday but didn’t have time to finish it because everything turned sort of crazy after lunch. After a week on vacation, catching up can sometimes be the hardest part!  So I’ll let you read what I had then I’ll add in dinner.

Hi guys! I’m having a wonderful day!  I had a glorious sleep and was in bed by a little bit after 10pm.  I did not run this morning but decided to rest and do yoga instead.  I did a 20 minute Hot Power Fusion session from Yogadownload (love this site!), poured some coffee and made oats because my stomach was empty and starving.  It made a point to let me know this several times. 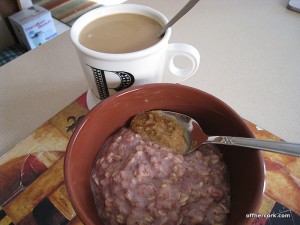 Sadly my oats were less than stellar.  Not wanting to turn into Veruca Salt, I decided that I would skip the blueberries in my oats this morning and use raspberries instead.  Huge mistake.  My oats were just meh.  To be fair I do not think it was the raspberries fault but more a result of a still under ripe banana.  The oats did the trick though and quieted my belly.

I fiddled around online and then got dressed and took Rocky out for his morning walk.  When I got back, I ironed pants that have been waiting to be taken care of for a week.  Then I hung them up and rearranged some closets.  After 3 years of living in this house, I’m still trying to figure out the best flow and where to place things.  I had a small morning snack. 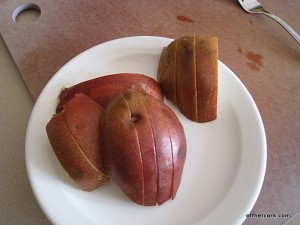 Which is totally rare for me! But my breakfast was early and I had an appointment to get defuzzed at noon so I needed something to hold me over. I munched on a red pear while putting away dishes from the dishwasher and getting the kitchen semi-organized.  I got defuzzed and now once again have normal looking eyebrows and feel beautiful!

After the defuzzing it was off to Whole Foods for a few things (crackers) and some lunch!  I have to say that the WF I go to is pretty lacking in the premade foods section.  Sure there are TONS of stuff but most of them:

A. Have some sort of land animal meat in them

B. Are pasta and rice dishes

The veggies dishes aren’t really all that much to write home about.  Some sauteed greens?  Wheatberries and tomatoes?  Today I left feeling very bummed that there was nothing I wanted to eat.  Because it was late when we got back home, I had a very light lunch. 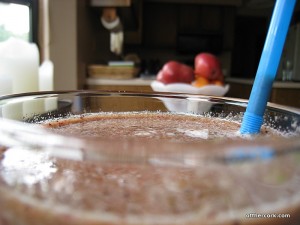 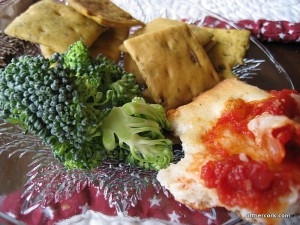 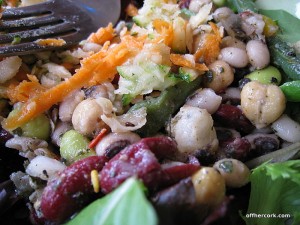 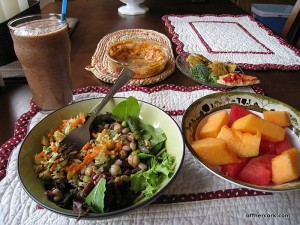 All together!  Oh and Fruit, how’d I miss that?!  Cantaloupe and watermelon, the best part of the entire meal!  The salad was just okay and I didn’t eat too much of it actually.  The crackers were horrible! Do not buy these 365 crackers.  I wanted to try them since they are cheaper than Kashi roasted veggie crackers but I’ll stick with kashi. That’s also a small piece of Scott’s pizza that he got for lunch. I love the crust so that part goes to me and Rocks.  You know it’s love when someone saves you their pizza crust!

The rest of the day was spent with me trying to put out fires and get things done.  Both Scott and I were trying so hard to catch up we almost didn’t make it to SF class!  Before class we had dinner, super quick and easy. 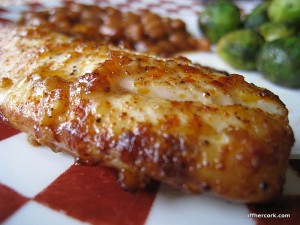 Tilapia baked at 400 with some teriyaki sauce and seasonings. 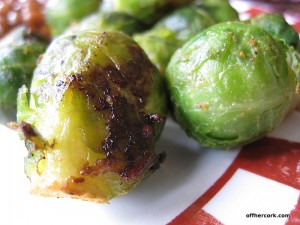 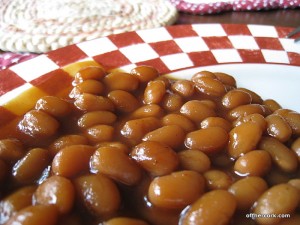 Baked beans! I have not had baked beans for ever.  They were so good! 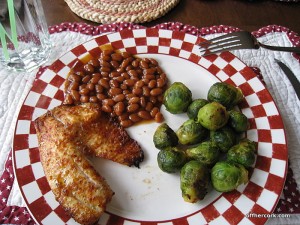 I guess it’s seafood week at the HQ! :p  I kicked my plate and had three more sprouts and a few bites of baked beans then I called it a day.

After SF class I crawled in bed to read for a while.  I’m currently reading Mirror, Mirror by the same dude who wrote Wicked and I have to say that so far this one is just okay and only slightly holding my interest.  Wicked was the best, Son of a Witch was totally horrible, and Tales from an Ugly Stepsister wasn’t so bad.  I have not read Lost.  Anyone else read these books?