Yesterday was the last official day of vacation and I’m sad.  We had a great time and I would love for us to have more time like that.  Of course we didn’t get to do everything we were hoping to do, mainly stuff around the house, but we did do a lot and had fun. That’s the important part!

My desktop computer seems to be functional again and thank goodness for my husband because otherwise I would have no idea what to do or how to go about doing it.  He some how managed to get everything working and running and now I don’t have to limp along with grandpa any more.  I’ll try to keep this in mind the next time my sound decides to randomly disappear or when my computer refuses to play videos.

Anyway on to yesterday! 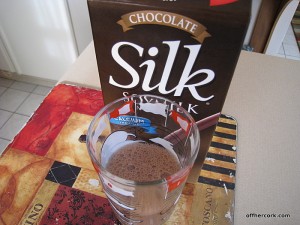 I got up and ran probably 3 miles.  It wasn’t until the end of my run that my knee started bothering me again.  Since I didn’t do anything on Saturday, I was hoping it would go away.  Not so much. Meh.  So I cut my run short and headed home.  The upside is that there is no lingering pain nor is there any pain once I stop running. And since it started later in my run yesterday, I’m also viewing that as a positive.

I had a small glass of CS and then took Rocky out for a walk.  Back home in comfy clothes!  I took grandpa laptop into the TV room and I sat down with a small breakfast. 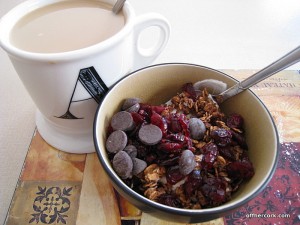 Some coffee and a bowl of yogurt + granola.

I haven’t had that combo for a while and it was delish!  I worked on the laptop for a bit and then it was time for grandpa’s nap so I tucked him in and sat back down on the couch with Ina.  Because her new season was starting Food TV was showing a lot more Ina than I was interested in so I changed channels.  For some reason I don’t find her Back to Basics concept that great (but I love love love Giada’s new Giada at Home series so much better!).  I swapped Ina for Reno 911! because that’s the kind of humor I have.  Don’t hate.  They were having some sort of mini marathon because they were going to show Reno 911!: The Movie later which I saw and it’s not good.  The show, however, kills me and I laugh like a two dollar hooker who just got 10 bucks whenever I watch it.

I was watching that show when King OHC himself got up and blessed us with his presence.  I told him what I was watching and tried to catch him up without laughing and it didn’t work. I almost snarfed my second cup of coffee.  While he watched with me, his belly started playing a rumba so I headed into the kitchen to make some breakfast.

We were out of maple syrup and that meant pancakes or waffles were not options.  That’s what I really wanted so I was slightly cranky pants about that.  I got over it and made something yummy anyway. 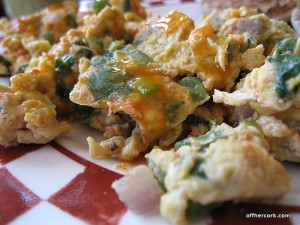 Scrambled eggs with sauteed red onion, green pepper, and spinach.  Some salsa added in at the end for extra kick and I topped my portion with chili garlic hot sauce. 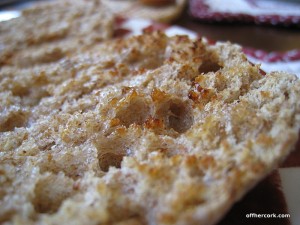 Whole Wheat English muffin with a touch of butter. 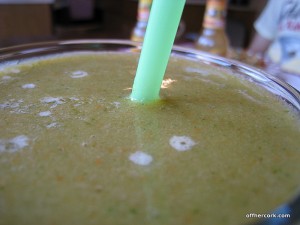 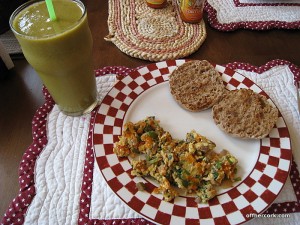 This one was actually green!  And it was delish!  I cleared my plate and cleaned up the kitchen.  Then I finally took a shower and got dressed.  Scott and I headed out to Meijer to “pick up a few things” which turned into me full-on shopping.  They were having a major sale on produce which is something that they rarely do.  Oh sure a few things might be on sale but yesterday tons of things were on sale!

I got peaches and nectarines for $1 a pound.  Cantaloupes 2 for $3 when usually it’s 2 for $5.  A gigantic watermelon twice as large as my delicate flower sized head for slightly over $4 and all kinds of other wonderful things.  Our total savings was $40 which might not seem like a lot but for what we bought, it totally is.

It must have been a while since I’ve been to Meijer because everything was changed around.  I know they do this so it takes you longer to shop and possibly make you buy more. Which doesn’t work on me, I end up just getting a bit irritated.  This time it did make me go slower and what I noticed was that more of their produce is now labeled as being from the U.S. whereas before a lot of things were from Mexcio.  That’s part of the reason why I was looking for an alternative.  And they are starting to get in more organic things which is a bonus!

I put the groceries away and started dinner prep.  Then I fed Rocks and called my mom for a quick chat.  Then it was time to eat! 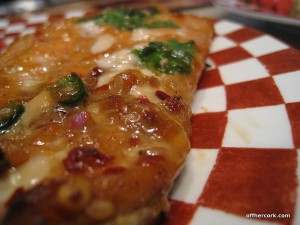 Teriyaki salmon that I baked in the oven at 400 for about 7 minutes or so. 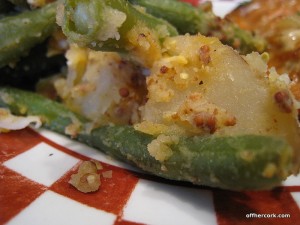 S: This is good. How do we eat this, straight up?

A: With tortilla chips.

S: Oh. Well I can eat it straight, so whichever way works. 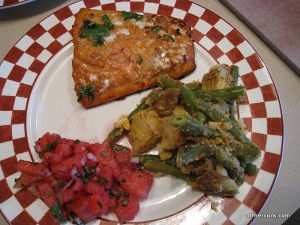 I had three FoodShouldTasteGood multigrain chips with the salsa.  The rest I ate straight up on my plate. 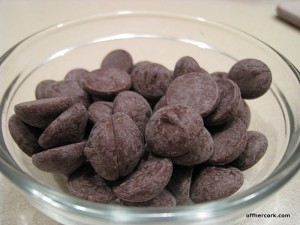 We watched TV for a little while and I snacked on some dark chocolate chips.  I probably had 10 and at 10pm I headed up to bed to read.  I didn’t get too far because I was tired and pretty much zonked out as soon as I laid down. Seems I started and ended my day with chocolate.  I’ll count that as a good day!