Hi guys!  The game last night totally had me on the edge of my seat!  It didn’t drive me to drink (boo!) but it did drive me to these. 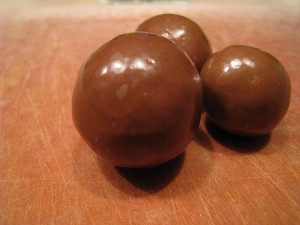 Some malt balls, I had three and totally felt guilty for eating them.  I have no idea why!  It wasn’t a huge amount, so no big deal.  My problem was that I wasn’t hungry, I just had dinner!  So I didn’t really need them.  I’ve been really great in terms of listening to my body and what it needs/wants that I got a bit disappointed in myself.  It happens to us all right?

Then I got over myself.  Three maltballs, who cares?!  Life is short.  Live it and love it and so I am.

I could have easily not even mentioned any of that but part of the whole point of my Daily Eats section is to share my journey to clean eating and healthy balance.  I’m only human just like all of you, and we all have our moments.  I thought it is only fair to share that with you, being open and honest as I can be. We can’t help each other unless we’re honest right?

Okay now that is out of the way, moving along.

I slept till 8am today!

I did get to bed late and I don’t see that changing until sometime next week. I’m a slave to the playoff games and for that I’m not apologizing!

I was starving this morning when I got up! And freezing, goodness the temperature sure did plummet.

After feeding my kid, I got breakfast together for Scotts and myself.  He had a choice today between oats and oatbran and he picked oatbran.  Well technically he said, “Whatever” and then three minutes later said, “Oatbran!”.  Ooookay. :p  So that’s what we had. 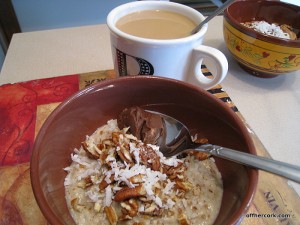 Creamy and delicious!  Basic mix-ins with a bit of coconut, crushed raw pecans, and some dark chocolate PB.  And morning coffee which was fantastic today.  After breakfast I got purty and then it was off to physical therapy.  I explained my situation of what happened with my leg.  To briefly recap:

Ran last Wednesday, 2.5 miles just fine.  Thursday, threw a front kick at MT and tweaked it a bit. Friday could not run.  No lasting pain though just couldn’t run.  Ran yesterday and was able to do 2 miles.  Thigh/back of knee still tight but no pain.

Surprisingly this was my last session!  He said that I was doing well and it is going to be a slow progress to be 100%.  I can run and do what I can do increasing my mileage slowly.  He said if things go well I can increase 0.5-1 mile a week.  I know my body and that’s a little aggressive of an increase for me so I’m just going to take it very very slow.  I’m just happy to be able to run again and not have therapy any more.

Let me be clear that I loved the people at that office and the office itself.  Everyone was so nice and it was just a great laid back atmosphere.  But I’m glad to not have to go back and hopefully I won’t have to go back any time soon!

After PT, it was WF time!  My main reason for going was to get some sweet and spicy vegan sushi.  I have been dreaming about it since the last time I had it, ages ago!  I was so disappointed because there wasn’t any there.  Ack!  I kindly asked them if they are still making that sushi and they said yes and made me a roll.

I’m thinking that the time might have come for me to switch fully to shopping at WF and forgetting about Meijer.  WF always has better looking produce and some things I can actually get cheaper.  Like canned beans, 365 brand, salt-free for 99cents.  I don’t trust Meijer brand beans and Bush’s beans are close to $2 a can.  That’s a lot, especially since we eat a ton more beans now.  It will take some thinking over and debating, and possibly a test run before I decide fully.

Back home and it was time for lunch!  I was so hungry but it was late in the day so I didn’t want a ton of food. 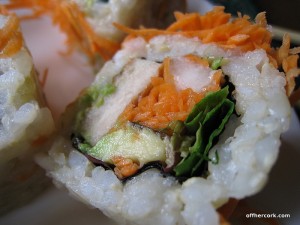 I had some of my sushi, three rolls. 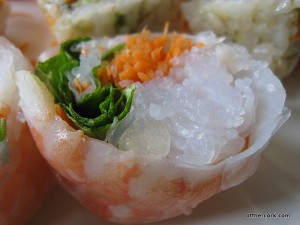 Shrimp spring roll, that I cut into sections and had three sections.  It had lettuce, cilantro, and a ton of cellophane noodles. 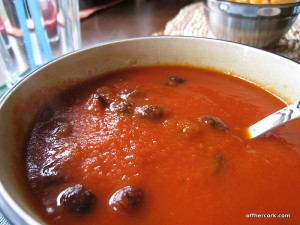 Some tomato soup with black beans. 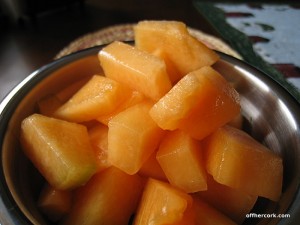 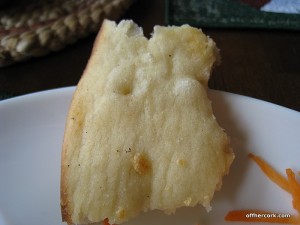 A small piece of Scott’s pizza crust to dip in my soup. 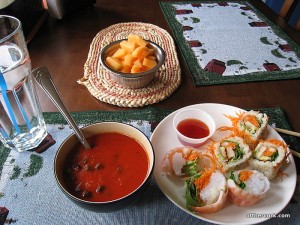 The whole party!  The cantaloupe, sushi, and spring roll were plenty for me.  I only had a few spoonfuls of the soup.  The spring roll had a ton of cellophane noodles in it, which I took out.  Too much for nothing.  No additional flavor, texture, or nutrition so to me it was a waste of an ingredient and calories.  I dipped the spring roll in the sweet chili sauce.  I asked and Scott asked if they sold the sauce separately so we could buy some but they didn’t understand what we were asking.  I’m going to have to track someone down the next time I’m there to see if they do sell the sauce because it’s awesome!  Sweet and spicy, leaving my tongue just a bit tingly.  Love it!

I cleaned up the kitchen and got some work things out of the way, then it was time to work on today’s post.  It was still gloomy gross outside, cold, and totally calling for some tea. 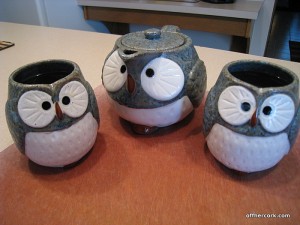 I tried making some jasmine green tea first and it was horrible.  I couldn’t stand the taste even after adding a good bit of agave to it.  Scott didn’t like it either so I made us some tea that Bryan sent us.  Score!  This was so much better and didn’t need any sweetener at all.  Wooo!  Thanks Bryan!

I also was looking for an excuse to use my lil’ tea set because it’s so sweet.

Eventually I had to start thinking about dinner.  Originally I had planned on making some udon noodles but since we ate lunch late (and Scott had 3 slices of pizza!) I realized that would be way too heavy.  Instead we had big honkin’ salads! 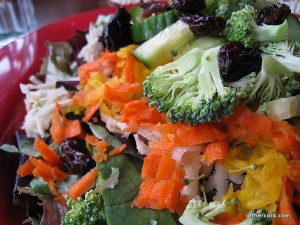 Topped with a smidge of yogurt Caesar dressing. 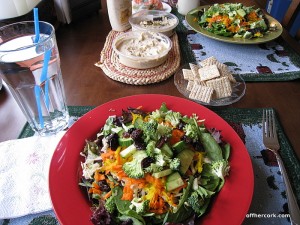 There was also some wheat 365 crackers and garlic hummus involved.  Mmmm!  Eating the crackers + hummus tasted like toasty garlic bread.  So good!  I had 2.5 and I totally picked out the biggest and thickest crackers to eat.  If I’m only having that much, I want a good experience.

As much as I would love to stay home and chill because I don’t fancy going out in the rain and cold, we must.  SF class tonight!  I’m allowed to do all manner of training (both for SF and MT) except for front kicks.  I can’t do those for a while. Makes sense as that is what tweaked my leg last week.  Soon my pretties I’ll be back to normal!