Hi guys!  Last night Scott and I watched some TV and I drowned my sorrows in these. 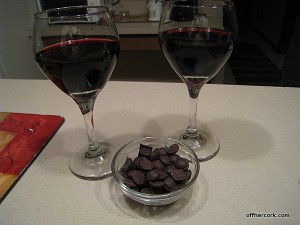 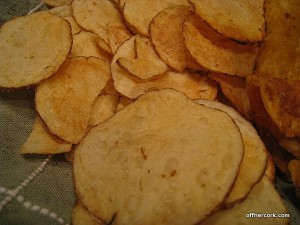 Red wine (2 glasses) and some baked chips.  I had 5 dark chocolate chips and realized that isn’t what I wanted, I needed some salty crispy crunch action.  Oh yeah!  Total indulgence and it was very yummy.  Salty goodness, mmmm.  Then I went to bed and slept decent enough.  I got up going on 8am and took care of the Rocks.  It was amazingly warm out for that early in the morning.  I changed clothes and headed out for a run sans hoodie and toboggan.  Crazy! 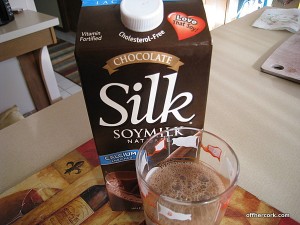 I wore a knee brace for my run this morning.  I have one of those braces that have the velco straps on the top and bottom.  It’s from when I dislocated my knee three years ago.  So I wore that and while it was a bit cumbersome it did seem to help.  I only did 3.5 miles at a very slow pace. I didn’t want to push myself but I very much needed to get a run in.  My body was craving the run and so was my mental health.  Plus today is beautiful and I needed to be outside!

I came home and put my robe on, woke up Scott, and headed downstairs for breakfast. 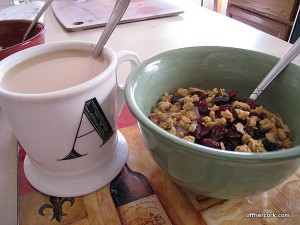 More berry oatbran today!  This time I added a pinch of brown sugar to help offset the tartness of the berries.  There’s raspberries and blueberries in the oatbran.  Cranberries on top and some blueberry granola.  Yummy!  And coffee which was fantastic this morning.  I only had one mug of it though.

I called to set up an appointment with the doctor and I got in today!  Wheee!  You can see what the doctor said over here.

The doctor appointment took a while so by the time we were eating lunch it was after 3pm.  I did have 1/2 a Luna cookie and 3 pieces of cantaloupe before the app though because I was hungry.  I wanted veggies and veggies today for lunch.  Since it was so late, I knew this was going to be our lunch/dinner as well.  We had an event later in the evening and I wasn’t sure what the menu was going to be, so like a good food blogger, I got in all my veggies and fruits beforehand.  Also to keep me full so that I wouldn’t be tempted to overeat at the event. 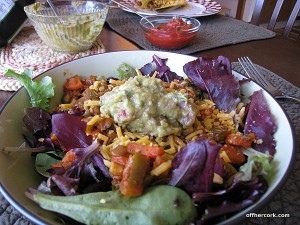 Lunch was some leftover lentil taco mix on top of some mixed greens.  A little cheddar and some guac as well.  I also had 3 FoodShouldTasteGood Jalapeno chips with a small amount of guac on it.  Fabbo lunch!

Afterwards, I made us some smoothies.

So good and totally filling!  This lunch/dinner did the trick and kept us full.  Apparently I forgot to take a pic of it! Doh!  Look to yesterday’s smoothie, same thing.

The event was so fun and awesome!  Full review of it will be up tomorrow.  Here’s a preview of what I ate though: 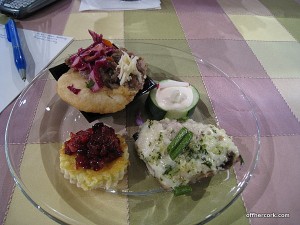 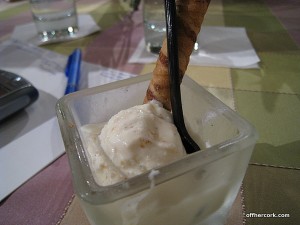 Toasted sesame ice cream with a cookie thing.  The ice cream was awesome and I didn’t eat the cookie, I gave that to Scott.  You know I’m not a big sweets person.  I also only had a bite of the mushroom and passed that on to Scott as well as I didn’t care for it too much.

Now I’m off to hit the couch!  See you guys tomorrow!