Hi guys!  SF class ran late last night.  I think it was going on 10:30 by the time we finally plopped down on the couch. :o  I needed a snack and pulled out some frozen grapes except they went bad and I had to move along to something else. 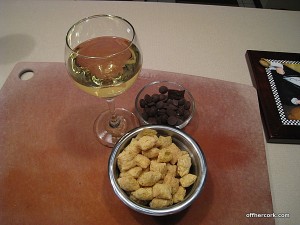 Final decision, small doses of wine (so the bottle wouldn’t go bad!) PB Puffins and some chocolate chips.  I only had maybe 6-7 chips as they were not what I was looking for but I ate all those Puffins.  Mmmm!  I haven’t had Puffins in ages.  And then it was 11:30 by the time I went to bed.

I got up for my run this morning and then proceeded to have one of the crappest runs ever.  First I overdressed.  It was cool with a good breeze going this morning when I took Rocks out so I wore capris and a longsleeved wicking shirt.  Too much!  I was so hot and it had gotten humid out so I was dripping sweat.  Ew.  And my body just did not want to go this morning.  I had 0 energy and even after a mile or so my body was not having any of this running business.  Half way through I got a cramp and nothing was working to take it away.  I only did 2.5 miles today, meh.  I wanted to do at least 3.5. I want to try to get in 3.5 for tomorrow and Thursday then nothing till race day. 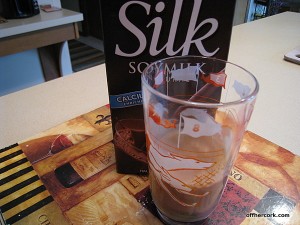 Worked up a thirst

Just because I was super thirsty, I had some CS when I got back home.  Then I stretched and hit the shower.  I got my loves up and then headed downstairs to make breakfast.  Only oatbran would satisfy today! 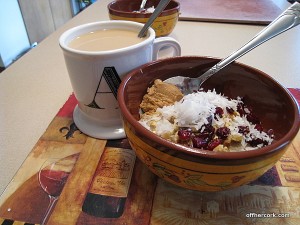 It’s been a while since I’ve posted my oatbran combo:

Mix-ins were cranberries, walnuts, and coconut with a small scoop of cashew butter.  Along with coffee which was super awesome this morning, I had my power comfort breakfast.  That was a pretty big bowl of oatbran and I didn’t eat it all.  Not long after breakfast I had to run over to physical therapy.  I needed to pay for last week and pick up another resistance band for home exercises.  I’m done with therapy now, hooray!!  Hopefully if I keep do the workouts and used a foam roller like crazy, I shouldn’t have anymore issues.

After the race I’m treating myself to a new pair of running shoes!

Back home and I tried to get Rcoky out for his walk before it started raining.  No dice, we got caught in the rain.  Rocky hated it but I powered him through and we got a full walk accomplished.

When we got back home I did my home exercises, popped in a load of laundry and got started on lunch.  I needed a salad and beans, that’s what my body was craving. 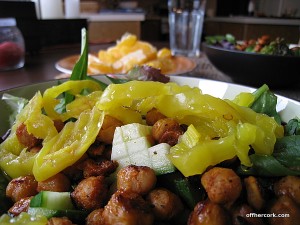 Dressed with red wine vinegar and olive oil.  YUM!  In the middle were two oranges I split with Scott.

After lunch and cleanup I took some Emergen-C.  I’m not sure what’s going on but I feel very run down and blah.  It could be the two nights in a row of not enough sleep.  Or, my throat has been sort of dry lately so perhaps I have a small something going on?  Or maybe it’s both?  Who knows but I took some stuff to be on the safe side.  Scott told me to not go to MT class tonight but stay home and rest so I’m ready for race day.  But if I miss class tonight then that means we miss class all week.  Thursday is the ballet and Saturday is race day.