Hi guys!  Sorry no post last night but I was pooped and just wanted to hang on the couch with my  boys.  Before MT class I did have some yogurt. 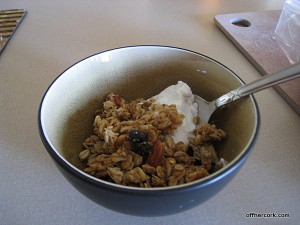 And fruit and nut granola.  Mmmmm

After class last night my instructor asked me if I’ve lost more weight.  Actually I have which I’m pretty surprised about considering my running has gone way down since my injury.  “How am I dropping weight when I’m not working out as much?”  It boggles my mind.  Anyway, he said he could tell.  And then made the comment to watch and not drop too much weight and not to get too skinny.  And then made a joke about going home and getting something to eat.  I laughed because he was joking and honestly didn’t mean anything by it.  However, when Scott and I got to the car, I said to Scott, that at least I have a website to point people to in the event someone actually does think I’m not eating or thinks I’m doing something else harmful to myself.

I love food too much!  I’m not giving it up!

And then we came home to pizza Thursday.  Hooray!! 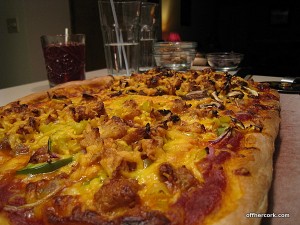 I used a WF crust as mine haven’t been working out lately (which is highly frustrating, ggrrrrr!).  No hidden carrots and zucchini this time, just veggies on top!  Toppings:

Moz and cheddar on top and more buffalo sauce drizzled on top.  YUM! 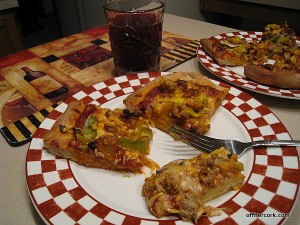 I had two and a half slices with a POM fizzie on the side.  Mmmm POM I missed you!  I can only find the big containers of it at one store that I don’t shop at very often.  Last night we made a quick stop on the way home and I picked some up. 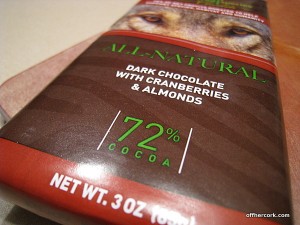 After dinner, we settled in to get started on the first playoff game and I had two glasses of red which really equaled a glass.  I split the glass in two, to last longer and because I didn’t really want/need two glasses of wine.  I also tried a new dark chocolate. 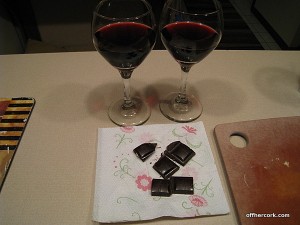 Dark chocolate with cranberries and almonds.  The dark chocolate was amazing but seriously lacking in almonds and cranberries.  Could have used more.  I had 2.5 squares.  The serving size was 1/2 a bar and goodness that’s a lot!  Those squares were the perfect amount, I couldn’t imagine eating more.

Then I hit the hay and passed out. I was wiped!