Being a part of the Foodbuzz Featured Publishers Program means we get to test out products every once in a while.  My first product sample to try out were the new Quaker True Delights Granola Bars (whew! A doozy of a name though!).  These bars come in three flavors: 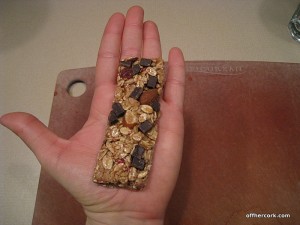 The first one I tried was the dark chocolate and raspberry one.  These bars are not very big, as you can see.  Looks can also be deceiving.  I noticed all the dark chocolate chunks first thing and was ready to bite into some chocolaty goodness.  However, I actually couldn’t really taste the chocolate all that much.  I was very disappointed.  I couldn’t taste the raspberry at all and if I didn’t know that was part of the flavor, wouldn’t have had any clue it was there.

Not to waste food, I crumbled up the bar and added it to some oats and went about my day.  I felt a little guilty about eating the bar though.  It wasn’t doing anything for me really so I sort of felt like I was eating some empty calories.  I know it’s from Quaker but it was not a dense bar with lots of volume to it. 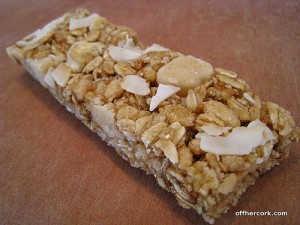 The next bar I tried was the coconut and banana one.  I was looking forward to this one because it seemed like a big hit with other bloggers.  The first thing I noticed when I unwrapped the bar was not the large chunks of coconut but the intense artificial banana smell.  Sort of like a banana runt candy.  I took a bite of the bar and it was just okay.  Seemed a little sweet and had a very distinct fake taste to it.  After two more bites I couldn’t finish the bar.  It became way too sweet and had me a little gaggy.  My husband finished the rest of the bar.  He said it was okay but also agreed that it was a little sweet and fake tasting. 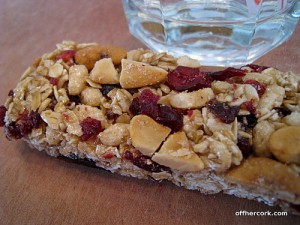 Last but not least was the roasted cashew one.  I will say straight up that I really enjoyed this bar.  It wasn’t too sweet but did almost taste like a lovely butter cookie with a hint of butterscotch in the background.  Very yummy!  And I totally inhaled it.  I give this three stars.  The berry flavor was not that intense but added a nice chew to the texture.

All of these bars are what I would call soft granola bars. Again, they are not very big bars and don’t really provide enough volume for a snack on their own.  Aside from the long fancy name, these seem like a typical chewy granola bar.  I also have to point out that the ingredient list is not very good.  I’m sorry Quaker, but I admit that I expected a little better quality ingredients.  All of the bars contain corn syrup or a variation there of (two of them have both corn syrup and corn syrup solids).  There are also other ingredients to help sweeten the bars such as maltodextrin, fructose, and invert sugar, just to name a few.  Each bar contains brown sugar which makes you wonder, why all the sweeteners for one little bar?

Because the flavors didn’t wow me and the ingredients left me a little unsettled, I wouldn’t purchase these bars on my own.  I’m not hating on Quaker though!  I eat their oats almost everyday!

I have a lovely coupon for $1 off any box of True Delights if you are interested.  Just leave a comment and let me know, and I’ll mail that to you right away!  If enough of you are interested, I’ll draw numbers.  Perhaps you’ll love these bars and then you’ll be able to tell me all about them.