Whoa! :o  I’m sorry about doing the whole day post twice in a row.  It was by total accident! Time got away from me today and before I knew it, it was time to head to MT.  Ack!

Last night did end up going longer at SF.  Boo on that but it was a good class!  When we got home all I was thinking about was tea and Puffins. 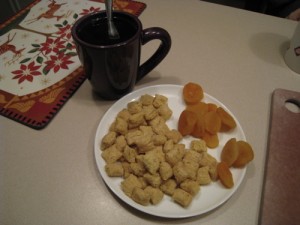 I had some peppermint tea + a small spoonful of honey.  And then on the plate is PB Puffins and some apricots.  I totally thought Scott was going to snack with me and he did not!  So I had to make sure I watched myself or I will mindlessly inhale the Puffins.  I had 5 apricots (two were split with Rocks) and about 1/3 of the Puffins.  I wanted more but stopped myself.  It was around 11ish I decided to call it a night and headed up to bed to read for a bit.

Last night was a rough night of sleep.

I got to bed later than I was hoping and Scott and Rocky both were making noises and fussing around which would wake me up.  I had every intention of getting up at 7am but that didn’t happen and I got up at 7:30 instead.

When I took Rocky out for his potty run it was very wet snowing and it was sticking.  Oh my!  I was hoping it would stay that way so I could run in the snow which I love.  I had to figure out what to make for breakfast this morning because we were out of bananas which meant no oats.  Scott told me “just go without it.”  Yeah right.  Not happening.  I must have the banana for my oats! 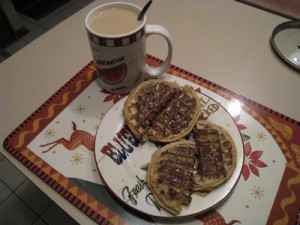 I settled on two kashi waffles with some dark chocolate PB on top.  Plus coffee + creamer.  I ended up only eating one of the waffles, it was plenty for me.  As I was about to change for a run the snow changed into freezing rain.  Lovely.  I walked from the front of the house to the back several times as I tried to figure out what I was going to do about running.  Finally I went out on the deck to see how hard it was raining.  It seemed like a drizzle so I decided to head out.

I told myself if it was too slippery or raining too much that I could always come back home.  Today is a running day and I didn’t want to miss it!  It was a little slippery out so I ran on the road.  I stuck close to the side where it’s more beatup and has gravel for better traction.  I only did a very slow 2.5er today.  The weather would flip between rain/freezing rain/rain the whole time.  I was glad to be out and moving though. 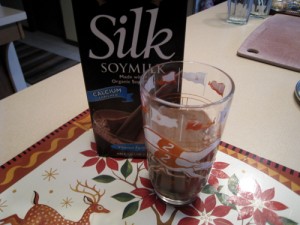 I went super slow so as not to risk slipping and possible injury.  It wasn’t too bad and at the end I was pleased with getting it done.  I drank my CS and then hit the shower.  By the time I got home, it was raining too hard to take Rocky out for his walk.

After showering I got dressed and headed out to my appointment to get my brows and lip defuzzed.  My lip was driving me more nuts than my brows!  Before I left I was a bit hungry and had 1/2 a spooky s’mores Zbar. 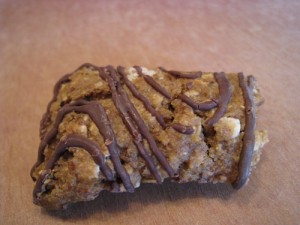 My blog came up and I passed out my first business card!  So one of my very favorite people might be stopping by along with her daughter.  Hi Joy and Gretchen!

After my app it was time to hit up WF.  Scott and I always go there for lunch if we are in the area.  One of my vows for 2009 is to be more open to trying new things.  I decided today would be a good day to put that into practice since WF tends to have lots of things on their prepared foods aisle.  One of my goals was tofu and trying different verions.  I have not had good tofu experiences and am hoping that will change.  Usually WF has a little section of like three to four different kinds of tofus near the salad bar.

You know they did not have anything today!  Of course!  The only tofu I could find was part of a spicy noodle dish but I got some anyway because that was on my agenda for today.  Scott also got in on the try-something-new action and bought sushi with brown rice.  So proud! 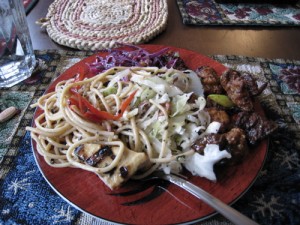 Here’s my little plate of stuffs.  At the top is a red cabbage + beet slaw, then buffalo soy nuggets, then the spicy noodles, and in the middle is another cabbage slaw.

The red cabbage was okay but the onions were potent so I picked those out.  The spicy noodles were meh and the tofu in it was yucky.  Not firm enough for me.  I didn’t eat them because I’m having rice for dinner tonight and didn’t want starchy carbs for two meals.  The other cabbage slaw was okay.  The soy nuggets were amazing!  Chewy and crispy with a really great buffalo sauce that wasn’t too hot.  I could not stop eating them and gave two to Scott. 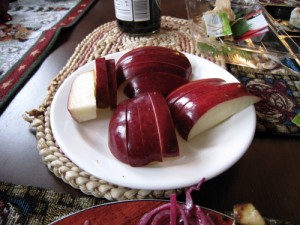 I also had a red delicious because my little plate was not enough food since some of the things I didn’t eat much of. I also had a bit of Scott’s sushi, ick.  Can’t handle the seaweed taste.

After lunch and cleanup I ran Rocks out for his walk.  It was miserable outside.  Cold with misty rain. And did I mention cold?  Brrr!  The damp cold that blows right through you.  I busted out that walk in no time because all I wanted was to get back home!

Once home, I did some work and some bloggy work.  Then it was time to head to MT!  Since I ate a late lunch I didn’t need a pre-workout snack.

Man was MT slow going today for me.  After two weeks off, yeah my muscles didn’t want to work much and my moves felt very sluggish and weak.  Hopefully that will go away soon!

After class, it was still miserable outside.  Very cold rain.  Yuck!  No walk for Rocky, thankfully he at least got one in earlier today.  Dinner was easy peasy, leftovers! 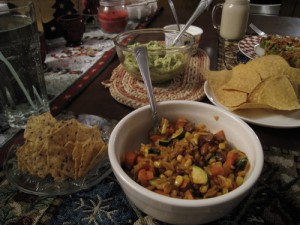 Avocados were on sale at WF today so I picked up two that were perfectly ripe and made a quickie guacamole dip for dinner tonight.  I had that with multigrain chips and leftover innards from yesterday’s stuffed peppers.  It was yummy but needed a little umph.

I added a wee amount of sour cream and a little bit of salsa.  Mmm that made it mucho better!  I did not eat that whole bowl though.  Close!  I am now pleastantly content.

I’m off to watch another period of hockey and then I’m calling it an early night.  Fingerscrossed the rain doesn’t turn into ice otherwise I won’t be able to run tomorrow morning.