Hi guys!  I was right, I had to have my afternoon snack a little early.  I read my book while I ate. 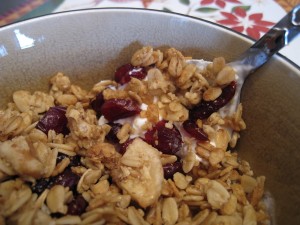 2% fage with bear naked banana nut and some cranberries.  So good!  While at the store we got a few extra things but no fage.  For some reason this store has been really bad about keeping fage in stock.  Boo.

Then it was off to MT conditioning class which kicked my hiney today.  Well, considering it’s been about a month or so since we’ve been, it’s no wonder.  I powered through though because I knew I was coming home to some pizza pizza! 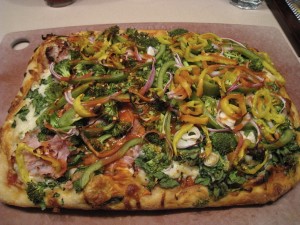 Hooray Pizza Thursday!  I did not make the crust because I ran out of time today.  I used a WF crust that I pulled from the freezer.  It’s a mega veggie pizza.  Check it out: 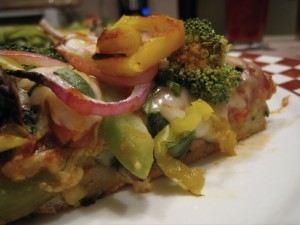 YUM!  Scott’s side had additions of more cheese and some ham.  I tried a new technique today which worked amazingly well!  I shredded (grated, whatever) the zucchini and carrot then wrapped them in an old kitchen towel (that I keep for just this purpose!) and squeezed out as much of the liquid as I could.  Carrots and zucchini both have a ton of juice and I didn’t want it to make the pizza soggy. 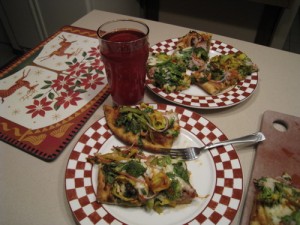 I had two slices and a huge cranberry fizzie (cranberry juice + lemon/lime seltzer).  I only ate 1.5 slices though.  The pizza was awesome and totally hit the spot.  Perfect!  I couldn’t even notice the zucchini and carrot!  It is a great way to add some extra veg to a pizza and sneak it in.  Scott said that if I hadn’t told him, he never would have known.  Those of you with picky family members or hubs, try this out and see how it goes over.

Scott’s doing dishes and I’m off to finish my fizzie on the couch.  Hopefully I’ll be heading up to bed soon for some reading.  See you guys tomorrow!