Warning: Parameter 2 to WPE\Site_Preview::the_posts() expected to be a reference, value given in /home/customer/www/foodembrace.com/public_html/wp-includes/class-wp-hook.php on line 303
 December 1st, 2008: Lunch and Dinner | Food Embrace

Hi guys!  I did indeed work legs today at PT.  Umph!  I squatted 105lbs! :o  And I did lunges and some other thing I don’t know the name of.  Also a little bit of arm and ab work.  Sadly this will be my last few sessions coming up.  For lots of reasons, one of those being to save money and put what’s going to PT towards something else.  I’m bummed because that means no more PT but okay with it because it means money for plans we have for the house and other things.

After PT we ran to the Eddie Bauer warehouse store and OHMERCY!  I can’t even begin to tell you how ecstatic I am about all the things I bought!  I should take a picture for you so you can see.

I didn’t find any pants but I got a ton of shirts which look awesome on me!  Totally replaces all the shirts I have that I’m swimming in.  These are flattering and sooo pretty and comfy!  I also got a very pretty long skirt and a new purse!  I am so picky about purses.  The last one I got when we were there is nice but a bit too small.  This one is perfect and such a pretty green!  Green used to be my favorite color and then I moved to blue but now I’m leaning towards green again.  :p  Two of the shirts I bought are a nice blue though!  Oh and I got an awesome sweater for $10!  Love the warehouse!  Plus we had a 20% coupon, wheee!

I had to hurry it up though because Scott was getting very very hangry.  He also scored some pants and two shirts.  And both of us got some very toasty gloves.  I was starving as well and decided to make some oats! 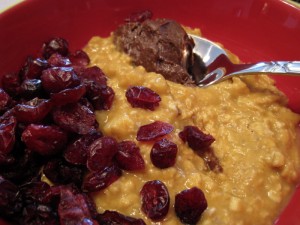 It was such a cold blustery day that oats sounded just perfect.  I made pumpkin oats!  And I made a huge batch so that I can have leftovers for tomorrow morning.

My mix-ins were simple today, dark chocolate PB and cranberries.  Scott had an Amy’s enchilada dinner and I had a bite of that.  I was really impressed with that actually, it tasted very yummy! 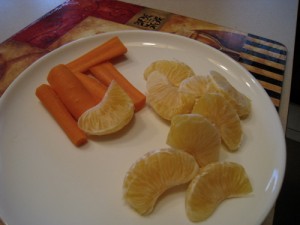 My oats were not enough to fill me up.  I did major damage today!  So I had one clementine and and one carrot.  That filled me right up.  I went up to shower and after my shower I started another load of laundry.  Then it was off with Rocks for a super quick walk because it was nasty cold and windy outside.

Once back I did a little bit of work and then I started supper prep.  I had a huge acorn squash and a little dumpling squash that needed used up, so I decided to give a go with the soup that Hangry Pants had for Thanksgiving.  I roasted that in the oven with an onion and two apples, red delicious and granny smith.  I tossed them in some olive oil, S&P, garlic powder, and chili powder.  It smelled so good as it roasted!  Then I pureed everything up in the food processor and transferred it to a big soup pot.  I used chicken broth instead of veggie, because I like it better.  A little bit more seasoning and let it simmer for a while.  While it was simmering I cleaned up the kitchen and did all the dishes. 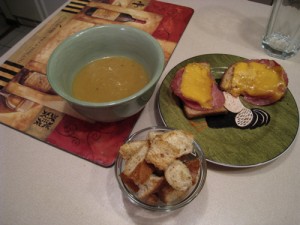 On the side I had an open face sandwich with some Italian salamis and a slice of cheddar.  Yeah I know they aren’t the best, but for the holidays we like having snackies around (also I’m experimenting with recipes!) so here they are.  Plus you all know about my lurve for sausages and that includes salami.  The other lunchmeat I had turned so I had to toss it.  Dinner was really yummy!  I was iffy on the soup but once it simmered and the ingredients got to hang for a bit it got much better.  The apple was a little potent for me but Scott loved it so I’m guessing most people would dig it.  Croutons on the side for dipping, I had one.

Now I’m on the couch posting this and then doing a bit of work.  Sadly no SF class tonight.  I have too much work I need to get done.  There may be a snack or special drink (and by that I mean coffee) in my future later!  See you guys tomorrow!