Morning guys! Today started off a little strange and it’s left me a wee bit tired. I did go to bed early last night and was all excited about getting tons of sleep. However, Rocky woke up around 5:30am this morning to go outside. Ugh! When he gets up like that, I have to feed him as well. Otherwise, since he’s up and doing things his hunger starts to kick in and if I send him right back to bed after being out, he’ll eventually get sick from being hungry. He’s sensitive like that. So I got up and took him out and fed him, then we went back to bed for an hour. I was going to stay up and just run but then I didn’t want to run in the dark and I don’t have any reflective clothes to wear. I shut off my alarm thinking that I would just sleep and run whenever I got up.

I ended up not falling back to sleep and got up at 7am anyway. At 5:30am it was already starting to get humid out so I’m glad I didn’t run any later. I decided to try and extend my route a bit but either it’s not really longer or I was faster today because I ran this “longer” distance in less time. Eeep! I really need to map out my runs so I know exactly what distance I’m running. Came back home and had my recovery drink. 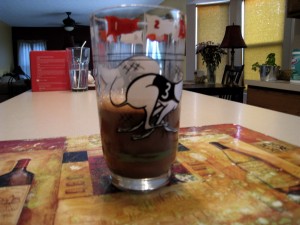 Then I grabbed Rocky and we headed out. He didn’t want to get back out of bed this morning and looked at me like I had three heads when I made him get up. But we went for his walk and I cut it a little short because I knew he was tired. He’s all crashed out on the couch right now. I changed into my recovery clothes and made breakfast. 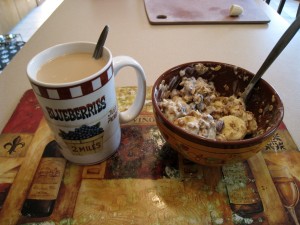 Are you guys tried of seeing the same breakfast yet? It’s one mug of coffee + creamer and a bowl of 1/2 cup granola, 1 sliced banana, a small handful of raisins and dried cranberries combined with 4.5 spoonfuls of yogurt. This was Stoneyfield French vanilla yogurt that I got when we were at Whole Foods a little while ago. So far that’s the only place I can get the vanilla flavor. See that little piece of banana in the background? Whenever I slice up bananas, I also leave a little bit for Rocky.

Time for me to go wake up Scott. I may try and sneak in a wee nap as the confused morning has left me still tired. Later guys!