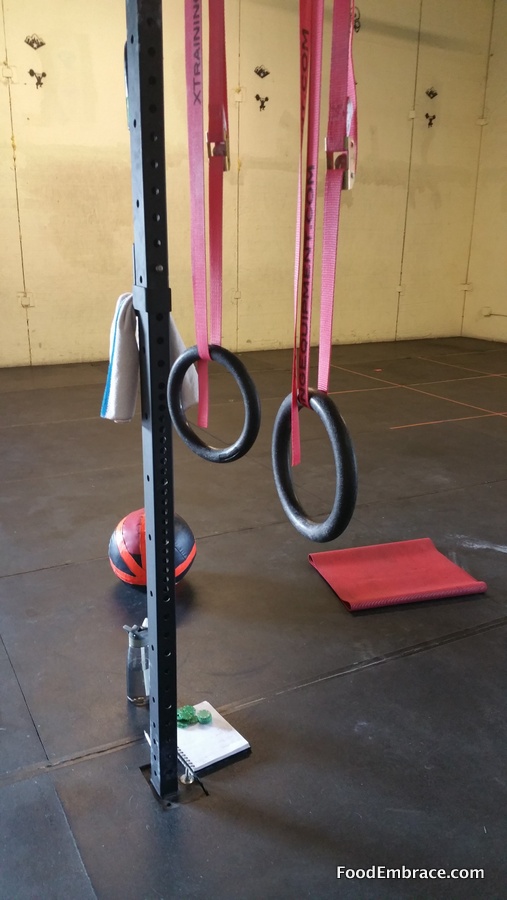 Rough night of sleep Sunday evening lead me to playing catchup all day.  I slept late and hit the 9am class.  It was all running for the workout.  I was nervous about how my hip would hold up since this would be the longest run I’ve done in months.

I was slow AF and my sprint was more like a faster jog but I made it through all four rounds. My hip did amazing! It was slightly sore after the workout but nothing major and was gone after a few hours.

YES! This means I’m making progress and can start doing longer runs on the weekends!

Because I went to a later class I wasn’t able to get in any additional strength training that day.

Much better! I slept well and had plenty to eat to fuel me through this workout.

I did ring rows instead of pullups.  I was able to get through 4 rounds of pushups before having to switch over to being on my knees.  We were told that this workout we had to pace ourselves instead of trying to blast through the whole thing.  I ended up with 11 rounds + 19.  I was about 2-3 rounds behind everyone else.  Which is fine but maybe my pace was too slow? Perhaps I should have tried to bump that up a bit.  I’m happy with the workout and my results though. I thought for sure I would get gassed on all the squats but those are getting stronger and I’m able to do them for much longer.

We worked on snatches today and I’m still plugging away at a lower weight on this one. I’m making progress though and have been able to increase weight slightly.  Increasing ladder of:

I did some light squats after the workout.  My legs and hips were so achey and tired that I could only do a few reps at 65lb before calling it quits.  My body just wasn’t having it.

Partner workout today, not for time, just had to grind through.

So one partner does one set and the other partner works the other set, then you switch.  In total, we had to do each set twice.  Weighted lunges are still very challenging for me.  I used 20lb kettle bells and still had trouble getting back up after lunging.  Someday I’ll be able to do weight lunges without even thinking about it.

UGH.  I can’t even fully explain the workout because it was a crazy partner workout.  But it boils down to doing 90 reps of push presses at 50lbs and then rowing 2500m.  Yeah.  Coach told me to pick a pace and stick with it so I did just that.  I got through it, slowly, but I did it.  Wiped out.

Over all this week was just alright.  I was feeling really run down and tired the early part of the week.  Wednesday I was a wreck and thankful I had the day off.  I was feeling like such a slug this week and it was really starting to get to me mentally.

Right now I’m happy the week is done, it was a long one!