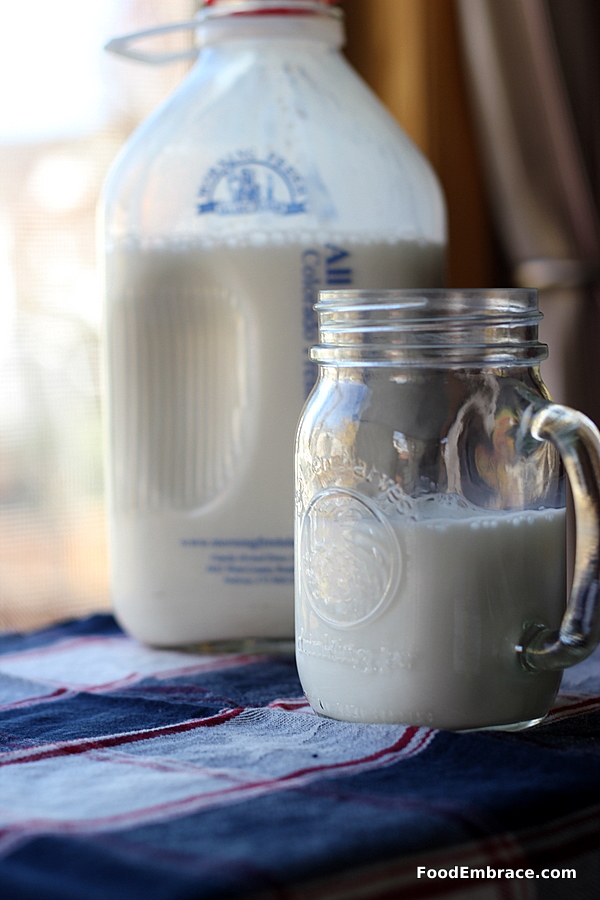 When we first moved to Colorado we started using milk in our coffee.  It was so easy and convenient because it was delivered right to our door each week.  The milk we got delivered wasn’t too bad, not fully pastured but I believed it to be pretty close and it was local.  I assumed this had to be better for us than the soy milk we were previously using for coffee and cooking.

As much as I enjoyed the milk, it didn’t love me apparently.  I started having digestive issues.  I didn’t equate it to the milk until two years later.  Yeah that’s a long time but I didn’t have any of the typical symptoms of someone who can’t tolerate milk.

There was no bloating (that I noticed at the time), no gas, stomach pains or cramps.  Nothing like that.  But it was clear that my digestion was way off and not where it should be.

Then I started not being able to tolerate other foods that I loved, like seeds and nuts.  Anytime I had those, I was immediately running to the bathroom.

That was my wake-up call.  Something isn’t right and I need to do something about it.  I decided to cut out milk as that made the most sense since that was the only big dietary change I’d made in the last two years.

Scott and I used to drink milk all the time until we learned that conventional milk at the store is horrible, so we gave it up cold turkey and went straight to soy milk.

Until this move, we hadn’t had milk consistently in coffee for over 10 years (only on the rare occasion when out for breakfast).  That’s a long time.  Not that we gave up dairy completely we just weren’t consuming straight up milk any longer.  Diving headfirst back in to milk consumption, I think it was too much of a shock to my system.

I gave it up for a couple of weeks and then tried to reintroduce it back in.  That didn’t go over so well so I decided to cut it out completely.

I have learned that I do not process large amounts of dairy very well.  I overlooked my symptoms because they weren’t the “standard issue” that you typically hear about with milk intolerance. These were the symptoms I suffered from:

Once I eliminated milk all of those things went away.  I didn’t even realize I had a bloated stomach until I cut out milk!  A week of no dairy and my stomach didn’t feel “as big” as it used to.  The hair loss surprised me the most. I was shocked to find it was related.  This whole process was very eye opening.

I do not have to eliminate all dairy.  I can handle yogurt just fine.  I can also do butter and cheese in small amounts. The main issue was straight up whole milk in my morning coffee every day multiple times a day.  It was just too much for my system to handle and my body couldn’t process it at all.

I’m currently working on repairing and restoring my digestive tract.  It was mistreated for two years so it’s taking some time to get it back to normal.  At this point I’m able to handle small amounts of seeds again in salads and I can also handle almond milk and almond butter.  I have a little ways to go before I can do whole nuts again.

But this left me lacking something for my morning coffee!  I’ll be chatting about making the switch to almond milk later this week.

2 thoughts on “Putting Milk Aside”