So my attempts to follow a meal plan last week didn’t happen.  We did have all the things that I mentioned previously, just not really in the order that was stated.  I tried!  And failed.  However we still ate at home and I’m feeling pretty good about last week’s eats. 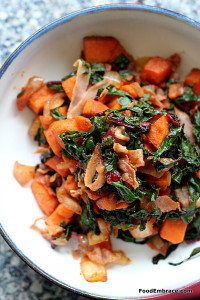 I have been off sweet potatoes lately.  I just don’t like them much anymore but I’m trying to change that and add them back into my diet for variety.  This breakfast bowl is getting me there!

Sauteed chopped sweet potato with swiss chard and onions. Topped with crispy prosciutto. First I crisped up the prosciutto in a skillet with a little olive olive.  Once crisp, I chopped it up and set it aside.  Sweet potatoes and onions got cooked in the same skillet in some ghee.  Once the potatoes softened, I added in the chopped chard.  Sprinkle with salt, pepper, and garlic powder.  Once it all was cooked, I added in the crisp prosciutto and served it up.  The ratio was:

This made enough for two big bowls. 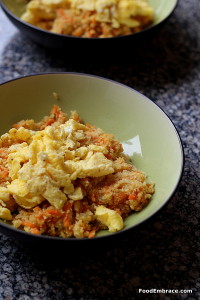 There was cauliflower fried rice.  It had onion and shredded carrot, all sauteed up with ghee and seasoned with:

Cooked it until all the veggies were soft and the moisture from the cauliflower was cooked out.  Then I added scrambled eggs on top which was cooked in a separate skillet. 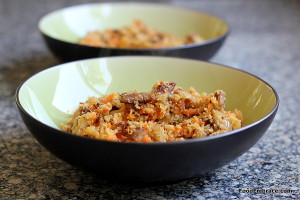 Leftovers and this time I added in some chopped fried pork side.  Basically sliced pork belly that has not been cured or smoked.  I cooked the full strips first, chopped them up and re-fried them with salt, pepper, and garlic powder. 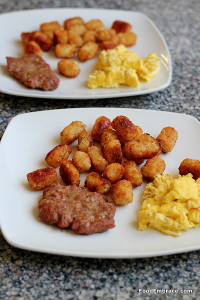 Don’t judge the tots!  Sometimes really crispy potato puffs are what life demands.  I cook the tots in a 400 degree oven, drizzled with olive oil and sprinkled with salt, garlic powder, and onion powder.  Along with some scrambled eggs and sausage, this was a filling breakfast!

The tots were 365 brand and had simple ingredients.  365 also makes sweet potato tots as well. 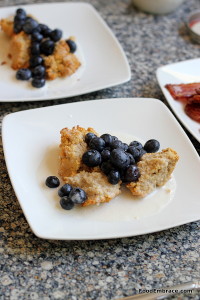 Still working to perfect my grain free scones.  This go around was much better!  These were topped with blueberries, coconut cream, and there was bacon on the side. 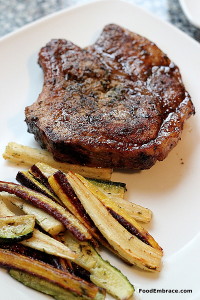 Bone-in pork chops with roasted carrots and zucchini.  The pork chops and the veggies were seasoned the same way:

The chops were cooked in a cast iron skillet in some lard and the finished in the oven with some stock added to the pan.  Pretty simple dinner that was satisfiying. 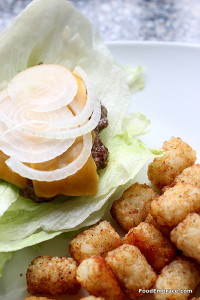 Burgers and tots!  Salt, pepper, and worcestershire seasoned the burgers and they were also cooked in a cast iron skillet in some lard.  I also topped mine with ketchup and mustard. 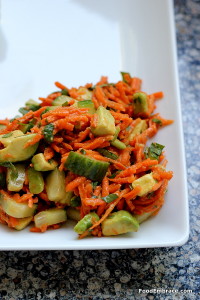 We had burgers again the next day and I made a quick simple salad for the side.

Shredded Carrot, Chopped Avocado, and Chopped Cucumber.  It was dressed with:

Very quick to put together and very refreshing on a hot day! 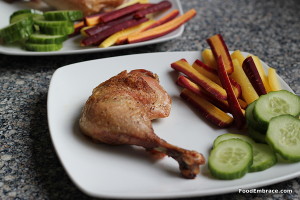 This dinner could not have been any easier.  A roasted chicken leg with some fresh carrots and cucumbers.  The legs were roasted at 400 for about 30-40 minutes.  Rubbed down with some olive oil, salt, pepper, and garlic powder.

The chicken is fresh from the farm so it doesn’t need much done to it in order to be flavorful. 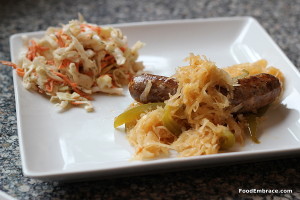 Sunday dinner, again super easy to make!  Since I’ve been making homemade mayo, we’ve been eating more of it.  Which means we have been back to eating mayo based coleslaws again.  So yummy!

Coleslaw on the side with a very basic mayo/vinegar dressing and lots of dill.  Along with some very spicy chili brats that were cooked in kraut, onions, and peppers.  Beer was added to that mixture and the brats simmered in all of that in the oven at 325 for about an hour.  I removed the brats and crisped up the skins in a skillet with a little olive oil.

We didn’t do too shabby this week!

I admit that I’m struggling with breakfast a little bit.  Not only deciding what to eat/make for the day but also with portion sizes.  Since protein fills me up so much, I don’t want to have a huge breakfast and miss lunch during the week (I don’t mind that on weekends).  I enjoy salads and smoothies mid-day and miss that experience if breakfast is really hefty.

So breakfast will be a work in progress for a while!

Because I didn’t plan ahead, I don’t even remotely have a meal plan in place for this week. I told you that this was a brand new thing for me to work on! I’m going to have to try and come up with something today.

What did you have yummy last week?

Chicken, eggs, and pork all are from Jodar Farms

Brats and beef from Whole Foods