I would love to share with you all the running I did this week but I’ve got a big fat 0 next to that amount.

Totally my fault and I know I should have planned better.  Next week will be better!

Our favorite walking spot isn’t quite so flooded out anymore so we can go and get some short little walks in.  The other day when we were out, we came across a gigantic snapping turtle in the middle of one of the paths (not the one we were using!). Click to see a larger image. 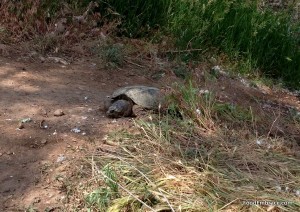 HUGE!  The dogs were not interested in him at all.  Either they just didn’t care or they didn’t realize he was a thing and assumed it was a rock.  He was very grouchy and he had every right to be.  We just let him have his space and moved on.  He wasn’t there today so hopefully he made it to where ever he was headed to.

The city has gone in and reconfigured the walking trail where we go and now it’s much closer to the river.  Since we have river access and it’s been much hotter lately, we have discovered that Avery loves the water. 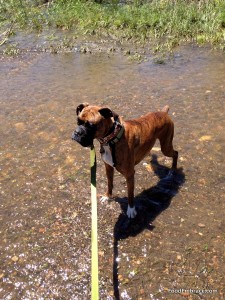 He will go and lay down in the water like it’s no big deal.  This is a dog that hates rain and tolerates baths because there’s cheese involved.  Never would have thought that he would be all about lounging in the river!

Penny will go in but she isn’t about to lay down.

How was your fitness this week?