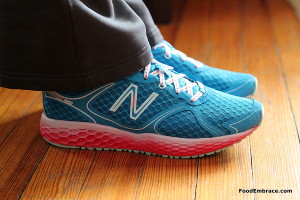 I had an alright week with running.  Definitely one of those times where I could have done more.

Monday I went out for an afternoon run and it was horrible.  My left shin cramped up pretty badly which then caused my calf to start cramping as well.  UGH  I had to stop 1/2 mile in and walk the rest of the way back home.  It was another 1/2 mile before my leg stopped cramping.  I tried stretching it out but that didn’t help at all.

It was so weird! I have never had that happen before.  Yeah I have had sore shins from running but they have never seized up while running.  Strange!

I took Tuesday off to give my legs a break.  I went out Wednesday morning for a run and that was much better!  I did have to stop for a walk break because my calves were getting achey.  But otherwise I was able to keep running no problem.

Now I’m annoyed at the situation.

My Calves are really tight and I’m wondering if it’s from the hike I did last week.  The trail had a pretty steady incline on the way up and I did have to walk through a lot of snow.  I’ve been stretching them out this week and making sure I get in some bananas!  If I don’t eat a banana, I notice that my calves are more likely to start to cramp or get a charlie horse when I’m sleeping.  It’s weird I know but if I make sure to get at least a banana in during the day then my legs are fine.  I normally eat bananas mixed in with a smoothies and it definitely makes a difference!  Apparently my body needs the potassium.

I just made a smoothie and used two frozen bananas!  Take that, stupid leg!

I’m also going to make sure I’m well hydrated and I’m going to fiddle with the laces on my shoes to see if either of those help.

My Garmin has been having trouble connecting to satellites lately.  I start it while I’m getting dressed but most days it doesn’t even connect until I’ve already started my run.  Weird.  I wonder if it’s because all the trees are full now that it’s summer?  Anyone else having trouble with their Garmin?

As always, next week I will shoot to be better!  How did your week go?

One thought on “Fitness Friday: Cramping My Style”