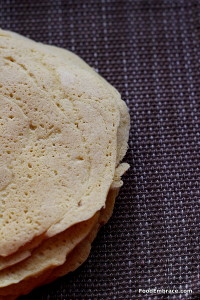 This tortilla recipe was born out of frustration and desire.

During the Spring Clean Eats challenge limiting carbs was one of the goals.  I also used this as a way to challenge myself in the kitchen and develop new skills (grain free cooking isn’t such a mystery anymore!).  Because I was reducing carbs, I had to come up with alternatives.

I wanted a tortilla or wrap that fit the guidelines of the challenge so off to the interwebs I went.  All the recipes I found didn’t really appeal to me for two reasons.

Either they used a ridiculous amount of eggs (I’m talking like 18 eggs for one batch) and/or the recipe only resulted in like 6 tortillas.

If you think I’m using close to 2 dozen eggs to make 6 wraps, you have lost your damn mind.

I decided to take matter into my own hands and create my own tortillas.  One that would use an acceptable amount of eggs and also made more than 1/2 dozen wraps.

Slowly add the egg mixture to the flours and stir until everything is mixed and a batter has formed.

Heat a medium sized nonstick skillet** over medium (to medium low) heat.  Add in just a small amount of lard or ghee (no more than half a teaspoon), let the fat melt and brush it around the pan.  Pour in 1/3C of batter and spread around with a spatula.  Making the tortilla as thin as possible.  Cook for 2-3 minutes and then flip cooking for another 2-3 minutes.

Remove tortilla from heat and set aside.

Repeat until you have used all the batter. 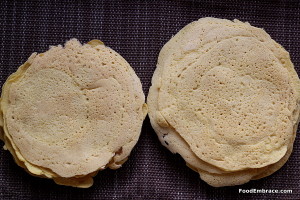 Some things to keep in mind as you make these tortillas.  They are a work of love, they will take you some time to make.  But you’ll be left with a big batch of tortillas that work great as wraps, or for things like enchiladas, or even crepes.  They also freeze and reheat well.

A nonstick skillet is key, I would not recommend cooking these with stainless steel.  If you have a very well seasoned cast iron, you could probably use that.

Coconut flour tastes sweet and has a vanilla flavor to it.  If you are going to use these for a Mexican inspired dish, some lime zest and a squeeze of some lime juice would go nicely.  I would also recommend using lard for cooking, it will provide a more savory flavor. 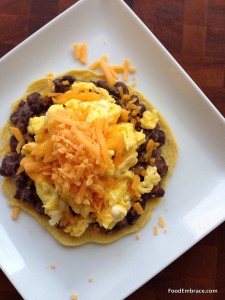 I’ve made enchiladas with these wraps as they fold and roll really nicely without breaking.  I’ve also topped them with beans and eggs to have at breakfast.

Since these tortillas freeze really well that makes them perfect when you want to make a quick sandwich or use for taco night.  Reheat them easily in a toaster oven or in a 300 degree oven for only a couple of minutes.