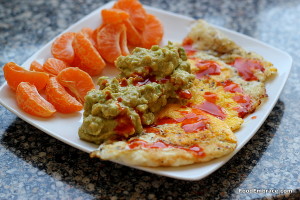 We are in the home stretch! This is the last week of the challenge and I admit that I’m pretty excited about that.  Not because I’m going to go crazy and have foods that were not allowed on the challenge (spoiler alert: I totally won’t) but because posting everyday takes a lot of planning!

On to the eats!

Breakfast was one of my favorite combos, eggs with avocados.  Two fried eggs topped with some quick and dirty guacamole and hot sauce. Two mandarin oranges on the side.

I spent most of yesterday in the kitchen developing a paleo tortilla recipe.  I was getting frustrated with recipes I was finding online and decided to see if I could create my own.  I’m proud to say that my experiment was a success!  Here’s a sneak peek, recipe will be posted after the challenge. 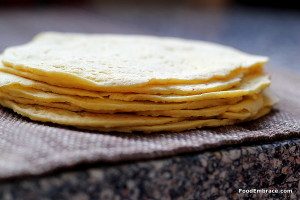 After walking the dogs yesterday, we swung by Odell to pick up a growler of a pilot beer that just got tapped.  It’s all kinds of barrel-aged and we couldn’t pass that up!

The Waffle Lab was there and we also decided to get some waffles.  Now I didn’t swear off grains completely for this challenge.  I said my goal was to limit them.  Since I haven’t had any grains, save for some small tempura shrimp, I didn’t have a problem getting waffles.  The Waffle Lab’s waffles are damn good!

Scott also came back with chicken and waffles.  I also didn’t think much about this till I opened the container up. 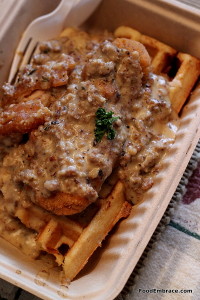 Oh snap! I had no idea this dish would be covered in sausage gravy.

That’s a lot of food.  A lot of heavy and very rich food.

I had a couple of bites and then had to call it quits.  Don’t get me wrong, this dish is tasty and done very well.  However that was just too much for me to handle for lunch.

That was the first time in almost a month that I’ve had that much grain and gluten.  Again, didn’t think much about it but my body sure let me know that it was too much too soon.  Interesting reaction!  While I’m not a big carb eater normally, I really didn’t expect to have such a strong reaction to it when it got introduced again. 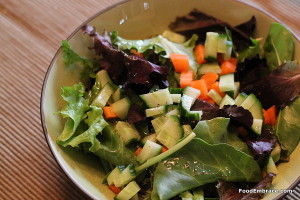 I ended up making a small salad because I needed some veggies STAT. 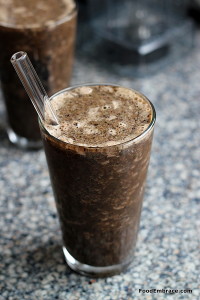 And then later I had a smoothie.  Not the prettiest thing ever but it was tasty and did the trick.

When I asked Scott if he also wanted a smoothie, he practically yelled, YES.  So I know it was sitting a little heavy for him too. Which is also interesting because he’s not one to notice stuff like that.  I did feel bloaty and blah the rest of the day.