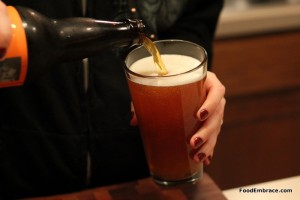 Craft Beer is definitely becoming more and more popular as people explore beer beyond the boundaries of the Big Breweries.

Many sites are trying to ride this wave by providing beer pairing lists to go with your holiday meal, and this is where I get grumbly.  Looking at some of these lists, it is very clear the author isn’t familiar with craft beer or how to approach the topic.

My two biggest complaints about these types of lists is that I feel the author does not take into account;

First up (and the most ridiculous one I found) is from The Daily Meal.

Reading the article you can gather that this author might not be a beer drinker.  She states:

“In Boston, the long-awaited release of Shipyard’s Pumpkinhead is accompanied by wringing hands, and excited squeals from grown men.”

Do men in Boston do this for Shipyard? Perhaps they do, but Shipyard is based out of Portland, Maine so I’m not sure why she’d be discussing the Boston male population.

Regardless, let’s look at her list of pumpkin beers for Thanksgiving:

The first one listed, right out of the gate, is Avery’s Rumpkin.

Ok, this is where my head might have exploded.

Rumpkin is a very limited release beer and it is not widely distributed.  So good luck getting one.  Not to mention this beer comes in at 18% ABV so if you drank this after a huge day of heavy food, it will knock you on your ass.  Well, at 18% it’s going to knock you on your ass regardless unless you share a 12oz bottle with someone else.

Just no.  You can’t list a highly coveted and sought after craft beer in one breath and then follow that up with a beer from Coors. (Didn’t know Blue Moon is actually Coors brewing? Lots of big brewers are starting to do this sleight of hand now.)

While I won’t dissect the whole list here, I will say that her other picks are at least a little better.

The Rumpkin aside, the big issue with this list is distribution and availability.  Smaller breweries don’t have a wide distribution area so most people aren’t going to be able to find those beers. 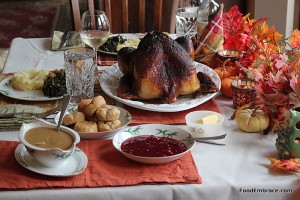 The Beeroness does a better job with beer pairings for Thanksgiving. Though I do feel that again, availability is playing a factor here.

And some of the beers, while not clocking in at 18%, do have a higher ABV that needs to be taken into consideration.

For Thanksgiving in particular, ABV plays a huge factor because this is a whole day of eating and sipping in most households.  Sipping 9% and up beers all day long is going to catch up with you after that slice of pie.  Especially if that slice of pie is accompanied by a 12% or higher barrel aged stout.

My recommendations for creating beer pairing lists for Thanksgiving is to seriously consider the ABV and try to stick with sessionable beers in the 5-7% (no higher than 8%) for during the day and then maybe a something slightly higher for dessert provided that it gets split up amongst guests.

For beer pairings in general, I think lists should provide styles of beers as recommendations verses listing a specific beer.  This way everyone can take that list and go to their local store to see what is available to them.  A style list will apply to everyone where a specific beer list can potentially frustrate folks trying to buy beer for a dinner.

Especially if those folks are just getting into beer and aren’t sure what to get.  They would be able to present a style list to someone at the store and ask for suggestions for those styles.

I realize that articles can’t get away with this fully and that they do have to list some specific beers because people are going to ask.  However, if the emphasis is on the style of beer, then readers will still have something to reference when they are out purchasing beer.

Seek A Brew will let you know which beers are distributed to which states.  It’s very helpful when trying to locate beers. By checking, the author would be able to provide a couple of suggestions that should cover most areas.

Keeping availability and ABV of the beers in mind will lead to a solid beer pairing list.

With all of that said, what are you serving with your holiday meal this year?