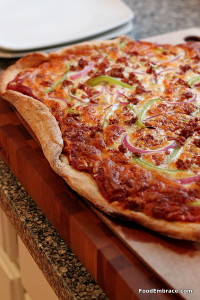 It’s been a while since I’ve done a full Pizza Thursday report.  And to be perfectly honest, I need a distraction from all the news about the crazy ass weather we’ve been having. Talking pizza sounds like a good distraction to me!

For those that are not local, Colorado is under a state of emergency and Northern Colorado has been declared a disaster area.  It’s been raining straight since Tuesday and most everywhere is flooded out.  A lot of towns have been evacuated.

We have not been.  So far.  We are just stuck at home and frankly, I am ok with that.

Since I was stuck at home, I made some chicken stock and some pizza.

I did the pizza a little differently this time and added another tablespoon of sugar to the dough along with some garlic powder and dried oregano.

The crust turned out perfectly!  It had enough heft to it that it didn’t pull apart when moving it on to the cutting board.  It was also very crisp and crunchy! 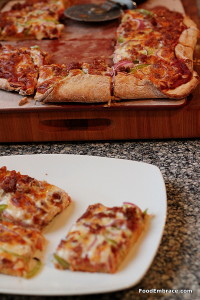 The pizza itself wasn’t anything fancy, peppers, red onion, and Italian sausage.  I wasn’t up for much experimenting last night, just a basic comforting pizza.

Scott and I recently started watching Dr. Who, so we watched that while munching on pizza.  Just started “Season 3” and both of us are very curious how this season is going to go.

So that’s it on our end!  Pizza, beer, Dr. Who, and watching weather reports.  What’s going on in your neighborhood?

2 thoughts on “Severe Flooding With A Side Of Pizza”