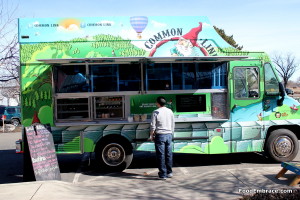 There’s a new business pairing that has taken place and it has me definitely jumping for joy over it.  Fort Collins is just now seeing a food truck “boom”, if you will, which is pretty exciting stuff!   The food trucks that we have here are fantastic and you can typically find them either somewhere in Old Town or hanging outside one of the breweries.

One of our favorite trucks to grab meals from is Common Link.  The food is fresh, homemade, and using locally sourced ingredients as much as possible.  The focus is on burgers, sausages, and hand-cut fries.  The fries can also turn into poutine if you like.

Scott and I have been lucky enough to become friends with Jesse and Derek, the owners of Common Link, but I promise you that my praise for their food is completely unbiased.  It’s just damn good.

Common Link will also have a brick and mortar establishment very soon!  They have joined forces with The Mayor of Old Town and will be taking over the kitchen there.

When I heard this news my head almost exploded from excitement.

The Mayor, as it is commonly referred to, is our favorite spot to go and grab a beer.  It’s right downtown but off the main stretch so you can still find parking without too much trouble.  They have 100 taps of beer and are constantly rotating beers and tapping new brews. This means the beer isn’t sitting for too long and they make sure their lines are clean.

The Mayor is great about updating their tap list and letting you know what they have on hand.  In a town full of bars you would think this would be common practice but it isn’t. The Mayor shines when it comes to that.

It’s a great place to hang out and can get really busy starting around dinner time.  Scott and I like a less busy atmosphere so we like heading over there mid to late afternoon for a couple of brews.

The Mayor served food and while it was alright, it wasn’t knock your socks off.  People go there for the beer, not the food.

That has all changed because now Common Link is serving food there from 4pm to 10pm week nights. They are still cooking out of their truck because the kitchen at The Mayor is getting a total overhaul.

Talk about a power pairing!  Now The Mayor is the go-to place for great beer and amazing food.  Two of my most favorite things in Fort Collins have joined forces and I’m freaking stoked.

To officially kick-off this pairing, The Mayor will be having a huge anniversary party on July 15th starting at 2pm.  The Mayor will be celebrating their two year anniversary!  In that time they have tapped over 1000 different beers from around the US and over seas.  They have served over 500,000 pints of beer.

That’s a lot of beer!

The kitchen remodel is scheduled to be completed by then and Common Link will be serving up food full time right from the kitchen!

For now you can still get your Common Link fix at The Mayor starting at 4pm week days.  So go swing on by and check out the new offerings and don’t forget to head over on July 15th for the big celebration!

Disclaimer: This is not a sponsored post and no one asked me to write this.  I really enjoy both establishments and want to highlight local offerings.