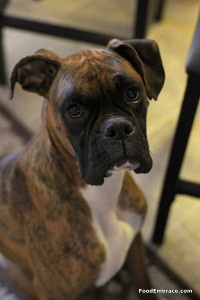 Posting was off these past couple of weeks because Scott and I have a new family member.  He arrived in a whirlwind of activity and we’ve been spending time getting to know each other.

As some of you know, our baby Rocky (boxer-pit bull mix) passed away last May.  He was 11 and passed away from kidney cancer.

While our life has been very exciting since then due to our move across the country, it seemed like something was missing.

Christmas was a little harder this year with no extra stocking by the fireplace and no doggie snorts as presents were opened. I was extremely sad and melancholy the entire time.

After being honest with myself and being willing to open my heart up again, I realized that I truly missed having a dog around the house.

Scott was a little more reluctant to jump into dog ownership again but he also realized how sad I had become.  We talked about it a lot.  Like everyday and every night.

We knew that we either wanted a boxer or a pit bull since those are the breeds that have stolen our hearts.

We got permission from our landlord to be able to have a dog and quickly put in an application with a boxer rescue.  After a whirlwind of driving to Denver a couple of times, we came home with this punk. 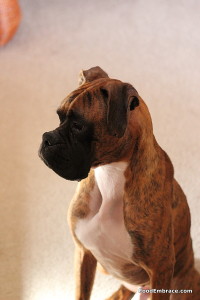 Since we live in Colorado and are huge beer fans, it was only fitting that we name him something beer related.  We chose Avery and it suits him really well.

He’s a two year old brindle boxer that the rescue found as a stray, and that’s pretty much all we know. 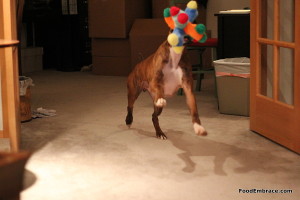 We’re all learning about each other.  Avery is learning the joys of soft beds and couches.  He’s also learning to play with toys and working on his manners.

I need to learn now how to take better pet photos. 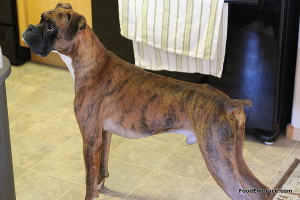 Scott who was reluctant to have another dog is  completely smitten and fell for him after the first day. Though he won’t admit it just yet.

There will be lots more Avery posts because he has a story to tell and I hope that I can share that with you.