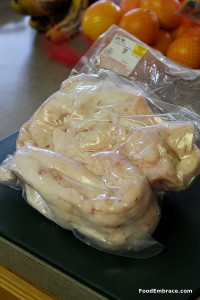 Last fall I purchased a half hog meat share.

This has easily been one of the best decisions I have made!  One, albeit large, payment and my freezer is stocked with pork cuts.  Enough to keep us in pork until summer.

It’s been a learning experience and one of the new things that came along with with purchasing a half hog is learning how to render lard.

I got the fat from the pig as well as the meat cuts and to be truthful, this was what I was looking forward to the most.

Lard from pasture raised (meaning properly raised pigs) is a great source of fat and good for the body.  Lard from the grocery stores is hydrogenated making it full of transfat and very bad for the body.

Fresh lard = great for you

Grocery store lard = stay away from

While lard is fat from the pig, you have to do some work to get it.  Lard doesn’t just happen, it takes a little bit of time.  The process requires rendering down the fat to separate it from anything else that might be in the fat.  The little resulting bits leftover from rendering are referred to as cracklings.  You can fry them up and eat them!

I looked up resources and found a great tutorial over on A Little Bit of Spain in Iowa.

I always get nervous when trying new kitchen techniques   I was completely nervous about rendering lard.  Would it take forever?  Would it smell?  What if I messed up?

As with most new experiences in the kitchen, you just have to suck it up and try.  So I did.

I had five pounds of pork fat that I cut up into small pieces.  In a large heavy pot (8QT stainless steel stock pot), I added in a half cup of water and then the lard pieces on top. 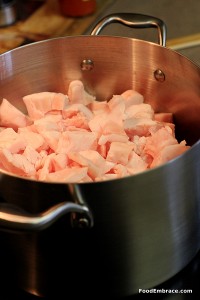 With the burner temp on the stove set to 1, I let it get busy rendering.  I stirred it every few minutes to make sure the lard didn’t stick to the bottom.  It took a while for it to get going but soon the fat started melting.

Yes there was a smell but it smells like pork and isn’t overpowering at all.

I let the lard render for a couple of hours, stirring occasionally.

It finally got to a point where I thought it had rendered enough, removing it from the stove, I started ladling the liquid through a cheesecloth lined strainer. 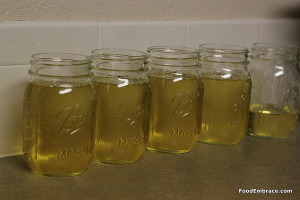 Five pounds of pig fat resulted in just a little over 4 pints of lard.  I let the lard cool on the counter over night, sealing them up with lids in the morning. 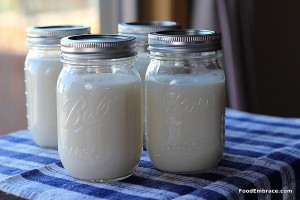 Unfortunately I did let the fat render a little too long which resulted in a lard that had a slight pork chop smell to it.  It’s a very slight smell and despite that I have still used the lard in baking.  Thankfully it does not result in pork chop tasting baked goods!

There is a slight savoriness to the biscuits and crusts that I’ve made but it’s delicious and not off putting.

Lard freezes really well which means there’s no worry about how to get through 4 pints of the stuff quickly.

If you have the opportunity to get your hands on some fresh pork fat, I highly recommend making your own lard.  It’s easy, you probably already have all the tools in your kitchen, and you’ll be swimming in pig gold which makes everything taste better.

One thought on “Embracing Lard”