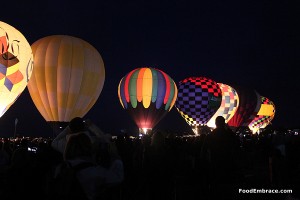 I love balloons and if you want to win me over really quickly, give me a balloon.  Perhaps that sounds silly but I honestly don’t give a flip.

It makes sense that I also adore hot air balloons and am completely fascinated by them.

I’m not sure if it’s because how whimsical they are or if it’s the romantic idea that one can just float away up into the sky.  Whatever the reason, I am in love with them and whenever I see one, I cannot look away.  I will watch it until either it’s gone or I have passed it.

Scott used to live in Albuquerque (Rio Rancho for those familiar with the area) and for years he has been telling me about the International Balloon Fiesta that goes on each fall. He promised to someday take me.  To be honest I didn’t think it would happen so I never gave it much attention.

This year we’ve been in a position where we have been able travel more.  Because of our recent move, Albuquerque is only 8 hours away by car and Scott surprised me by planning a trip down to see balloons!

The weekend was pretty fantastic!  The Balloon Fiesta was technically supposed to start on Saturday and we dutifully got up at 4:30am and made our way over to the park for the morning events. Yes, things start dang early.

It wasn’t until we got there that we found out that events for that day were cancelled due to high winds.  Lesson learned, always double check Twitter for updates!  Instead the day was spent driving around the city, eating, driving around where Scott grew up, and beer tasting.

We make it a goal to at least check out one local brewery if there is one.  This trip we located three!

Sunday we tried again and woke up at crazy o’clock to head over to the morning events.  This time we were not disappointed! 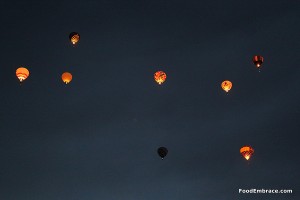 The morning starts off with a morning glow, a few balloons fill up and then light themselves up to kick off the fiesta.  Then they take off into the air!

Next the rest of the balloons fill up and take off as well for a morning flight.  It’s a really amazing thing to see.  You get to experience how big those balloons actually are and how quickly they can fill and deflate. 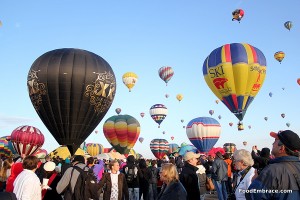 There were close to 300 balloons total this year along with some crazy shapes and characters.  A few I remember were a clock, Elvis, Darth Vader, fish, pig, dancing elephant, and so many more! 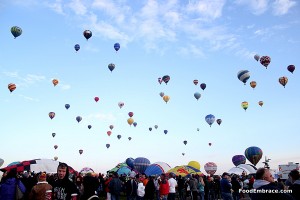 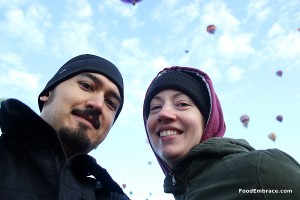 We stayed the morning and watched most of the balloons take off.  It’s cold in the desert so we were all bundled up for the morning events!

Then we left to go sightsee around town a little more before the evening events began.

The evening events included the launching of the race balloons who fly for days trying to make it as far as they can. 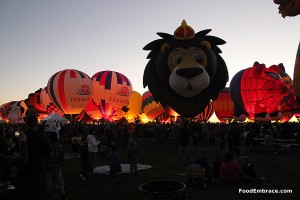 There was a night glow where all the balloons inflate and then light up. Similiar to the morning glow just with all participants instead of a few.  The balloons when they light up look amazing! And yes, the balloon on the far right of the picture is Spider Pig.  I told you, crazy shapes!

Our favorite that was closest to us was the Hendrick’s Gin Balloon. 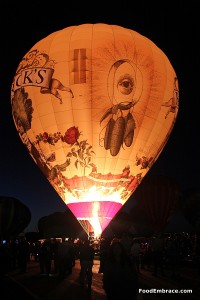 With 300 balloons all inflated it was a little chaotic and hard to see everything but we did get to see a lot of balloons light up and glow.

The evening concluded with a great fireworks show!

Scott and I definitely want to go again and perhaps stay for some of the events that happen during the week.  I would love to see the target race where the balloonists have to fly and try to hit specific targets.

The best part about the fiesta is that you have access to the balloonists.  You can walk the grounds taking close up pictures and chatting with the crew.  Some might even let you help with the balloon if you ask!

And there were plenty of folks there from over seas.  Not just balloonists but also folks traveling in just for the fiesta.  It was pretty inspiring to see so many people doing something they love and so many people supporting them.

If you like hot air balloons, definitely put the International Balloon Fiesta on your list of things to check out!