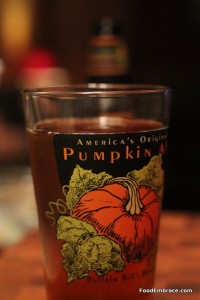 Today we have Ericka who is going to talk about founding the Columbus Ladies Beer Club! Oh I wish I had known about this sooner!

If you’re a man, feel free to keep reading, but this one’s for the ladies.

About a year ago, some friends and acquaintances and I decided to start a club. Not another book club or any of those traditionally female-only, wine-swilling girly clubs. We wanted to drink beer together.

Don’t get me wrong – you can be girly and drink beer, but you’ve got to be serious about it.

try out their pizza and beer selection, you’re missing out. They have a revolving door of taps, their current menu can be found here.

Those of us who live in the downtown area knew of their great beer selection courtesy of many previous trips and thought this might be a good place to try out this “club” idea of ours.

We took over the front window table and waited. At least 10 ladies showed up and I met some great new people.

One of our fearless leaders (and perhaps the most organized of all of us), Jamie, handed out sheets for us to record each beer we tried.

We also promptly got to the rules:

1. You always have to order and drink beer and, well, you’ve got to be a lady. Not in the “I-have-proper-etiquette-and-am-not-going-to-use-foul-language” way, but in the “I-have-a-uterus-and-I’m-proud-of-that-fact” way.

Oh, and anyone who has met me knows that foul language need not be exempt at our gatherings (Andrea says: A girl after my own heart!).

Another tradition that we started that evening was that there is a question asked of the table.

What seemed to be the most appropriate question at this first meeting was why everyone came and what they were hoping to gain from beer club.

Nearly everyone that night said they were hoping to learn more about beer – making it, drinking it, and loving it more.

Over the next few months, we met at other local watering holes known for their beer selections – Surly Girl Saloon, Bob’s Bar, Hal & Al’s, World of Beer.

We have had a beer tasting for each of the seasons and discovered some pretty obscure pumpkin and winter ales.

We had a group outing to the Winter Beer Fest at the Convention Center, where we definitely all discovered a new favorite beer (no one else liked the Bourbon Barrel Stout from Weasel Boy Brewing as much as I did for some reason).

We had a tasting in April of spring, fruit and farmhouse ales. Who knew that there are actually some fairly drinkable fruit beers out there? (Now is probably a good time to let you all know I will almost always favor stouts and porters.)

My favorite gathering thus far has been our June one at aforementioned Jamie’s house. After a few months of hearing some ladies say they still weren’t sure of each style and what the difference was, we concluded a proper tutorial needed to take place. Jamie (again, with her organization) compiled an entire packet of beer-centric info.

I can now confidently say I know the difference between an ale and a lager and can also give you some of the most random beer facts ever.

Did you know that George Washington had his own brewhouse on the grounds of Mount Vernon? Yet another reason why he was such a cool dude.

Jamie put each attendee in charge of bringing a sampling of a particular style. Mindy(our other leader) and I had entirely too much fun at the carryout picking out our styles. By the end of the evening, I think everyone felt a lot more comfortable about styles they liked and even some they didn’t. And maybe we were all a little drunk too…

So, why am I telling you all about this? Frankly, we love introducing new people to the group and want to drum up interest. And, personally, I really do get a kick out of a lady discovering that they don’t actually hate a certain beer.

Feel free to like the group on Facebook – Ladies’ Beer Club Columbus for information on future events.

Our August event will be on the 17th at House Beer (set to open the week prior, so here’s hoping they pass all inspections).

Here’s the article from Columbus Underground on the new business.

I’m not saying we’re experts in our group and we don’t claim to be, but we do love getting together and share what’s going on about town while downing some delicious brew.

On an additional note, we are celebrating our one-year anniversary in September. Plans are in the works to have a more formal dinner party, complete with course/beer pairings. If you have any interest in cooking or coming, please let me know. If you’ve done this type of event before, feel free to give me some pointers. This is definitely a dream of mine to host (I love to throw parties), but want to make sure it’s done right. Stay tuned.

And please support your local bars and breweries!