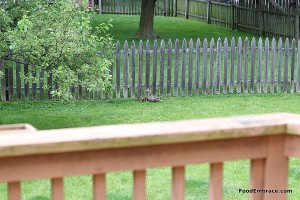 Yesterday I was sitting in my living room when I became aware of something moving out in my backyard. I didn’t think much of it because I just assumed it was a bunny. It was smallish, brown, and had a little white on it.

Then I realized it wasn’t moving like a bunny and at that point I flew off the couch to get my camera.
It was a mama duck leading all her little babies to some water!

She went from my backyard through the fence and into my neighbor’s backyard.  He lives directly behind us.

Please click on the pics so you can see them full size. 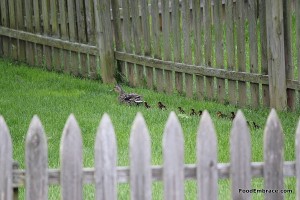 I believe she had about 10 babies with her which is a lot to handle.  You go mama! 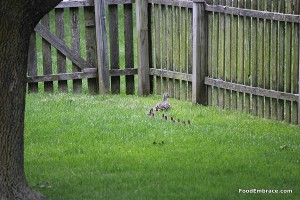 After talking with my neighbors I learned that her nest was just across the street from my house in my neighbor’s landscaping.  She built her nest behind some bushes and up against the front of their house. My neighbor had been feeding her and watching over the nest for two weeks.

Such a fun surprise! We have a lot of ducks and geese around here but I didn’t think that any of them would build their nest out that far from water.

First baby sighting of the season and it was a cute one!