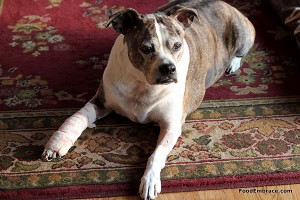 I was bummed out but damnit I will master this deep dish pizza if it kills me.

So since I don’t have any lovely pizza to show you, let’s get updated on the Rocky situation.

If you remember, Rocky had surgery on his paw three weeks ago.  We basically lived in our living room for two weeks.  Scott picking him up and carrying him on and off the couch, and down the deck stairs for potty breaks.

He was doing really well and last week he was set to have his stitches out.  However we had to take in him a day early because we noticed his paw was red and swollen to twice its size.

He had an infection.  We figured this would happen.  No matter how hard we tried, he did have an open wound on the bottom of his foot.  There’s no way to really protect that area because it had to be left open to dry and form a scab.

He got his stitches out and was put on antibiotics.

That night he had a reaction to the antibiotics (shortness of breath), a call to the vet, a dose of benadryl, and a 3 am vomit session took care of everything.

New antibiotics were provided the next day.  He hates them but handles them like a champ.

A week later he is doing so much better! He has no scabs (thanks to him licking them off. sigh) and the hair on his leg is growing back.

He paw isn’t swollen and we no longer have to live in the living room.  No more air mattress!  And he can go up and down stairs, jump on and off the couch on his own.

No walks yet but we’ll get there.

However, he still can’t be left to his own devices just yet.  We did a test run and went to the grocery store for about an hour yesterday.  That’s when he decided he didn’t need any scabs on his paw, thank you very much.

However,  the much anticipated and much needed date night for this evening has been cancelled.

Other than a few very brief moments, Scott and I have been cooped up in the house for three weeks now.  Most of that time, confined to the living room and kitchen.

To say we need a break would be an understatement.

We’re shooting for next week.