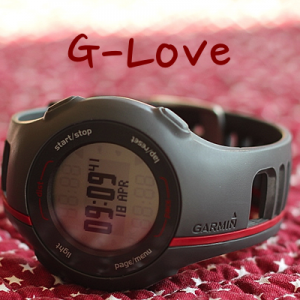 I haven’t been talking much about running lately because there really isn’t too much to say. I was sidelined for a few weeks because of watching over Rocky’s recovery. A few runs here and there but not many.

Most times I was snuggled with him on the couch.  This week everything is back to being status quo.  Rocky can be left to his own devices (which means sleeping on the couch) while I go out for a run in the mornings.

This week is when I decided to get back into the swing of things.  I lost a little endurance during that time but I’m sure it will come back soon.  Slightly frustrated but that’s about it.

I’m more frustrated with my newest piece of equipment, a Garmin Forerunner 110.

I bought this for Scott for Christmas in the hopes that it would inspire him to run more.  He likes gadgets and tracking progress and all that hoopla.

However, this present came with a clause.  If he didn’t utilize it and start running more, I was taking it for myself.

Well, now it’s mine and his name is G-Love.

Except right now I don’t love him so much.  One the heart rate monitor strap is too big so I have to order a new one.  I know, wah wah wah.

To a nonrunner, I’m sure this seems like not a big deal.  However that means my pace and all other calculations are off.

I know the distance is correct because I measured it both by driving it and using Google Maps.

So what gives G?

I want to love it and use it but right now I’m finding that hard to do.

Any experienced Garmin users out there have any advice, suggestions, or tips?