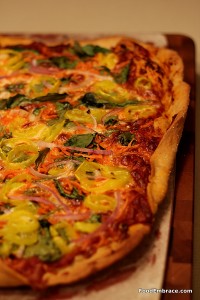 This week has been a busy one here at the HQ, more cleanup projects! Mostly still dealing with wallpaper removal. Yesterday I got started on the half-bath and that removal went s.l.o.w.  Oh man!  I think because the laundry room probably got warm from doing years of laundry, that helped loosen up the paper a bit.  The half-bath, not so much.

I had to start with just removing the top layer first and will then have to remove the glue at another time.  I worked on that bathroom for just over five hours.  After his work day ended, Scott helped me and we were able to knock out three of four walls.

To give you an idea of how tight this paper was on, we had to use razors to help loosen it.  OY!

This weekend you know it will be all about more removal and painting!

So by the end of the day, this lady was ready for some pizza.  And beer.

I did a few little twists with the pizza this week. 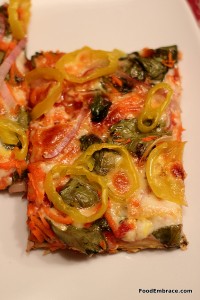 I used beer in the dough! I started off making the dough as I normally do and then when it was time to add more water, I used beer instead.  If I had been thinking clearly I would have used beer for the whole thing.  Ah well, next week!

I also chopped up two cloves of garlic very finely and mixed that with some melted butter.  I brushed that all over the rolled out dough before adding the sauce and toppings.  I brushed it out to the very edge of the dough.

For the sauce, I had some tomato sauce frozen that I thawed out and drained.  You have to drain thawed sauce or else it will be too watery on the pizza.  The dough will get soggy and  if you are using a stone, the sauce will leak out all over your oven.

I drained the sauce through a strainer until all of the liquid was done and I basically had a paste.  Then I added in just a touch more beer to help loosen it up but not so much that it would be watery. 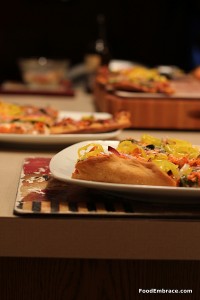 We loved this pizza!  The dough came out fantastic, a little more crisp but completely light and airy.  Scott kept mentioning how much he loved the crust.  The beer gave it just enough flavor that you knew something was different but were not hit over the head with beer flavor.

Butter and garlic on the crust? Definitely the way to go!

The beer I used for this pizza was Rivertown’s Helle’s Lager.  It’s a very beery beery.

Sitting on the couch after scraping walls and eating pizza was so rewarding!  I’m ready to get this project wrapped up though!

How was your week?